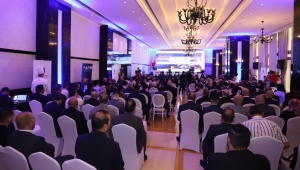 Iraq has launched the deployment of electronic payment tools after the development of infrastructure, in order to combat financial corruption and administrative rampant in the public sector, in addition to the elimination of bureaucracy and reduce the time in the completion of transactions citizens through electronic follow-up.

To define the importance of the move, the Association of Iraqi Private Banks, the Iraqi-Jordanian Economic Association and the Production Association organized the Digital Transformation Conference in the financial sector in Baghdad last Wednesday.


The Executive Director of the Association of Iraqi private banks Ali Tarek, in an interview to Al Jazeera Net, that Iraq has the infrastructure of electronic payment systems, which has seen a significant development in this area during the past four years.

The Iraqi government began in 2017 to implement the project to settle the salaries of state employees, which includes the opening of bank accounts for three million Iraqi employees to deposit $ 30 billion annually in banks participating in this project, aiming to eliminate the imaginary employees estimated by the previous government led by Haider Abadi more than 50 thousand employees, In addition to thousands of retirees who earn more than a salary.

A member of the Supreme Council for Combating Corruption and Inspector General of the Ministry of Interior Jamal al-Asadi said in an interview with the government newspaper Al-Sabah earlier that "the head of the Supreme Council for the fight against corruption, Adel Abdul Mahdi, is monitoring with the government to settle salaries because the project will increase economic activity and GDP, Shorten time, effort and cost in various financial transactions. "

He pointed out that "will eliminate the phenomenon of corruption in the job, so-called rumors of salaries or astronauts."

-Tariq pointed out that electronic payment tools are one of the weapons in the elimination of financial and administrative corruption, pointing out that Iraq has begun to develop in this area, especially after the International Financial Action Organization (FATF) to get him out of the follow-up area.

"The convening of this conference is very important for Iraq, because it comes at a time when the country is working to get rid of the bureaucratic procedures and the use of technology to facilitate the tasks of the people," said Ahmed Hanada, director of Gateway Iraq.

He pointed out that the digital transformation will eliminate bribery and corruption in addition to increasing efficiency with the speed of implementation and protection.

He pointed out that there is a gap between the citizen and the electronic payment, and the citizen does not use these devices, but the Central Bank has dealt with them through projects and media campaigns.