Recently "Adam Montana" sought to console his troubled minions with a word of encouragement about their "investment".  Below you will find a few of his comments followed by my commentary in bold.


Good morning everyone!
25th of June, 2014 - the situation in Iraq isn't one of peace and tranquility just yet, but I get the feeling things are coming to a head and it's not turning out that bad. Quite frankly, I feel that if things were to take a drastic turn for the worst we would be seeing it by now.

Not turning out that bad?  Excuse me??!!?  Their second largest city has been taken over by a terrorist group called ISIS that also stole millions from the bank there to further fund their organization.  So many Iraqi troops deserted that Maliki had to call on Iraqi citizens to join the fight.  Take a look at this map and tell me things aren't that bad.  About 1/3 of the country has been overrun by these militants. 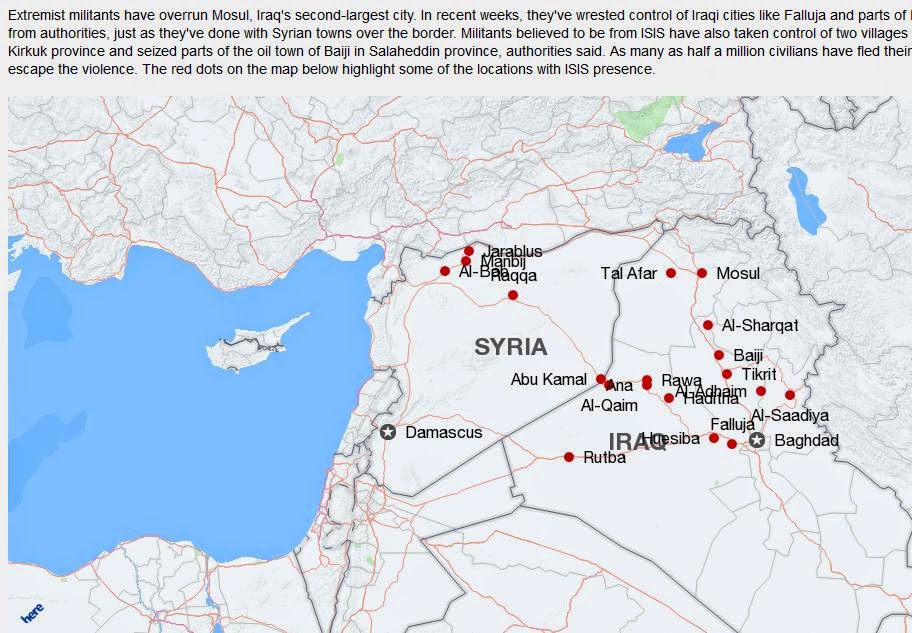 So here's the current scoop. ISIL is holding on and making waves still, but it's starting to look like they are stretching themselves thin and that's never a good thing for an attacking party. Jordan is aligning forces with Iraq, and it makes sense for them to do so because if they allow Iraq to fall victim to these attacks, they are not too far from suffering the same fate. Other countries (such as the US) are being slow to join, but it's getting apparent that Iraq will get some help sooner or later, and likely before anything can happen that would destroy Iraq's recent progress.

I got news for you, pal.  Iraq's progress has already been destroyed.  Ten years' worth of political progress establishing a democratic presence in the region is virtually dead in the water.  Listen to these quotes from Kurdish president Barzani.


“Iraq is obviously falling apart"
“The time is here for the Kurdistan people to determine their future and the decision of the people is what we are going to uphold.”
“Now we are living [in] a new Iraq, which is different completely from the Iraq that we always knew, the Iraq that we lived in ten days or two weeks ago.”
“After the recent events in Iraq, it has been proved that the Kurdish people should seize the opportunity now – the Kurdistan people should now determine their future.”

These are not the words of a man who thinks that this is just a temporary setback for the new Iraq and the GOI.  These are the words of a man who sees that Kurdistan has been a good sport and given the new Iraq a chance, and now sees that it has failed and the time has come for Kurdish independence.   Have a listen to this discussion on NPR with four experts on the region.

You would think that with all this madness and chaos and "OMG thebsky is falling!" going on over there, the currency would be plummeting back to the 4000:1 rate it was at a decade ago… but that's not the case.  In fact, the stability was only in question for less than a week, when the dinar "wobbled".

The IQD was never valued at 4000:1.  That was the street value of the old Saddam dinar.  The IQD has never been valued at more than about 1500:1 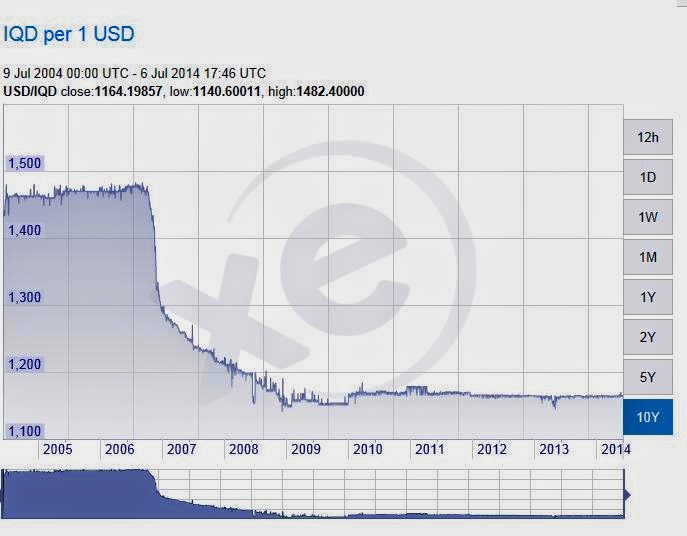 
Turki / Central Bank states that despite the current events, the dinar is and will remain stable. Not only that, they have the ability to maintain any rate without a roof. (That says "float" to me!)

Surely you jest, Wolfy.  The IQD would plummet if it were allowed to freely float.  A country facing the possibility of secession and war with such deep sectarian division doesn't exactly inspire a lot of international confidence.  And the current exchange regime that the dinar is on is a managed float, which means that they manage it in order to maintain exchange rate stability.  How does one profit from a policy like that?

(Yes, all this in spite of the "doom and gloom" the lame-stream media would have you believe!)

Yeah, right!  This is all just misinformation from the media who is owned by the cabal.  Unfortunately the gullible are likely to lap this up and hold onto their dinar, but thankfully many are wising up and moving on.

People like Adam Montana will never come out publicly as negative on the dinar "investment" for one simple reason.  They need people to believe in order to keep their revenue stream going.  Take if from me, there's not much money in telling people the truth about the dinar.