Ammar al-Hakim: This is our position on the American blockade on Iran

Ammar al-Hakim: This is our position on the American blockade on Iran

[size=32]Ammar al-Hakim: This is our position on the American blockade on Iran[/size] 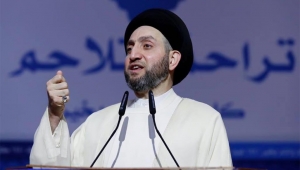 The leader of the Coalition for Reform in Iraq, Ammar al-Hakim, rejected the policy of the United States embargo against the Iranian people and stressed neutrality towards it, warning against being dragged into an ill-advised policy that might expose Iraq to international isolation.

"We are clearly saying that we are not neutral towards the siege and starvation policies that the Iranian and Muslim people are subjected to with unambiguous unilateral sanctions," Hakim told hundreds of his followers during the Eid prayer sermon. "Iraq knows more than any other country what it means to blockade people after the bitterness of the 1990s the last century.

He stressed the importance of unifying the compass of internal Iraqi decision according to the national constants of the state, and called for "never allow any irresponsible or uncontrolled actions in the local arena out of this context."

"From being dragged into illogical policies that may expose Iraq to international isolation and then we have returned to square one from which we started, we can not be part of any axis of confrontation, nor can we stand at the same time, when it comes to the interests of Iraq and its national security ".

He stressed that "can not continue the policy of war, conflict and conflict in our region, and must continue to open the international and the consolidation of the participants and mutual interests, and must be maintained the political achievement achieved for Iraq at the regional and international levels."

Tensions between Iran and the United States have grown since Washington pulled out of the nuclear deal in 2015, reinstated tough sanctions on Tehran and ordered all countries to stop importing Iranian oil. As hinted at the military confrontation, sending additional troops to the region to counter what it calls the Iranian threats.