The visit of Iranian Foreign Minister Mohammad Jawad Zarif to Iraq revealed the extent of Tehran's interest in Baghdad's initiative to mediate between the United States and Iran to avoid war in the region. Zarif's comments from Baghdad showed a new Iranian dependence on reforming relations with the Gulf states to ease tensions with Washington in exchange for a lack of interest in the Iraqi initiative .

Zarif said during his visit to Iraq, which ends this night, that his country "has a desire to build balanced relations with all Gulf countries, and has very good discussions on the conditions in the region."

He reiterated Tehran's assertions that "Iran has not violated the nuclear agreement, and that US actions in the region are contrary to the UN Security Council resolution to use force and violence," while promising to counter any moves towards war from America, whether economic or military. And steadfastness. "

Mediation does not change position

While Iraq is exerting considerable efforts, reinforced by visits and meetings at high levels, Mahmoud Ahmadinejad, director of the Iranian president's office, said that "the initiative of some countries to mediate between Tehran and Washington does not mean accepting Tehran to negotiate with the United States."

"The mediation of the various countries between Tehran and Washington does not mean our acceptance of negotiations with America," he told Iranian television.

"If American officials continue their current policy of economic pressure, negotiations will not be meaningful in such circumstances," he added.

In turn, a member of the Foreign Relations Committee in Parliament, MP Zafer al-Ani that Iran is ready to proceed with the worst options, which means the closure of Tehran the door to Iraqi mediation.

Al-Ani said in a leaflet on his Facebook page that "Iran is economically suffering and ready to go through the worst options." He was present at the meeting, which was attended by Speaker of the House of Representatives Mohammad Halboussi, with Iranian Foreign Minister Mohammad Jawad Zarif during And concluded that "Tehran suffers economically."

Iran "gives up" one of its strengths

On the other hand, the Gulf states in the conflict between Washington and Tehran represented a weakness of the United States; they are within range of Iran's military force, which threatens to target them constantly, while the arms of the Revolutionary Guards are another threat to the security of these countries.

Zarif's comments were interpreted as an official shift in the Iranian regime's policy toward the Gulf states in an effort to stave off the economic pressures that might come from Saudi Arabia and the UAE. Zarif said that "his country wants to conclude a convention to prevent aggression with the Gulf states."

Zarif's visit to Iraq coincides with the diplomatic moves of his senior aide Abbas Arajiji toward Amman, Kuwait and Qatar. 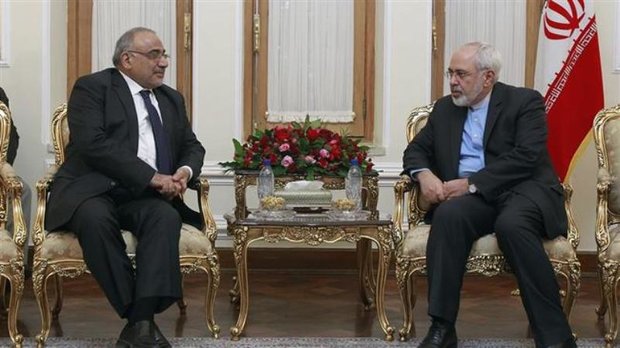 Why Zarif came to Iraq?

In the midst of the accelerating and escalating events, Zarif's visit to Iraq raises questions about the goal of his arrival, especially as he clearly expressed indifference towards the moves of Baghdad in order to play a major role in the truce with the United States.

"He held important and constructive meetings with the President of the Republic, the Iraqi Prime Minister, the Speaker of Parliament, the Minister of Foreign Affairs and the leaders of the parliamentary blocs," Zarif said in a tweet on Twitter. Zarif said that he discussed ways to strengthen bilateral relations and developments in the political situation in the region and developments of tension in the region.

He stressed that "the two countries began work to link rail between Iraq and Iran." The Iranian foreign minister handed the Iraqi president an invitation from President Hassan Rowhani to visit Tehran to "follow up the joint files."