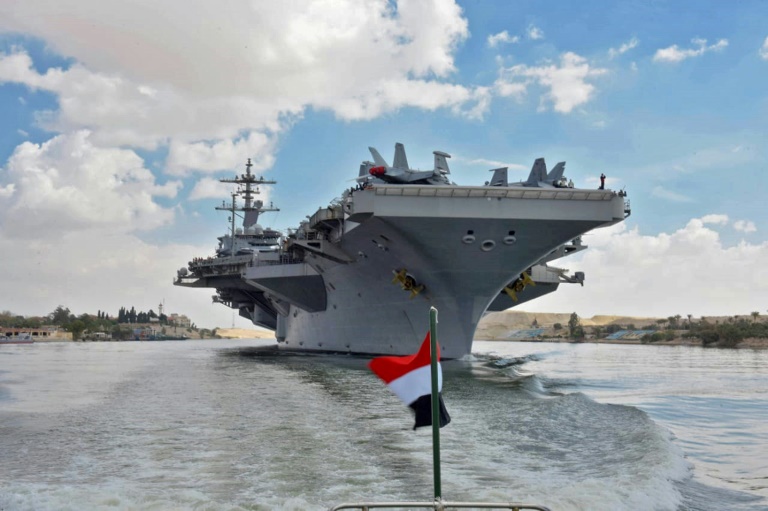 BAGHDAD (
Reuters) - The growing tension between Washington and Tehran has become the talk of the people of the country, which today is the scene of a conflict of influence between the two countries. The two bitter rivals.
With the voices of Morocco's ears heard in the capital Baghdad, the streets are empty these days of Ramadan, fasting people return to their homes for breakfast.
"The city is empty, as if we were in the days of war," says taxi driver Abu Hamoudi.
On Tuesday night, the State Department issued instructions to withdraw all non-essential US staff from the US embassy in Baghdad and the US consulate in Erbil because of the "ever-increasing threat". US officials blamed "armed groups operating in Iraq."
This came after the escalation of the escalation between the United States and Iran weeks ago, with Washington sending a naval group consisting of the aircraft carrier "USS Lincoln" and other parts, in addition to B-52 bombers, to the Gulf, to address the threats of Tehran, she said.
The name "USS Lincoln" resonates with the ears of the Mesopotamians, who almost disdain any security stability after wars over the three decades witnessed by their country.
"Lincoln means the region is on the verge of a possible strike," said Abu Hammoudi, a 50-year-old who drives an Iranian-made yellow Sayaba.
- "painful memory of " -
says he wiped sweat from his face every moment a small towel red so as not to operate the cooling in the car "completely remember how bombed (barge) Baghdad in 1991, was a terrifying night. No one then expected to get hit. But I got "He said.
The man was talking about Iraq's invasion of Kuwait, which called for intervention from the United States, which launched a lightning war called the "Desert Storm".
The war took place almost two years after the end of the first Gulf War between Iraq and Iran, which lasted eight years.
But yesterday's enemies of Iraq, its allies today, are hostile to each other.
After about an hour of breakfast, traffic and congestion return to the streets of the capital.
In the crowded Karrada district of central Baghdad, discussions are lively among those sitting at tables in cafes drinking tea and coffee. Their views may differ from the outbreak of war, but most believe that USS Lincoln does not move without a goal.
"In 1991, Abraham Lincoln was bombing Iraq, we have a bad memory of it," said Hussein Rashid, 45, a writer.
At another table, Sinan Salem, 55, told his friends how the strikes were "sudden and rapid, and everyone lost their balance" during that period.
"This aircraft carrier is a painful and frightening memory," said Salem, who was a soldier at al-Rashid camp in southern Baghdad, "just how we received an unexpected blow after midnight, I made the Iraqis expect anything."
"The
warplane is victorious" - on the opposite sidewalk, in one of the most famous cafes in the capital, civil activist, Acer Gergvaji, 59, confirms that the famous aircraft carrier "does not move just to pressure myself, but go out on a mission, and only return if someone paid her return" .
Ironically, on USS Lincoln, George W. Bush announced on May 1, 2003, the end of the "major combat operations" in Iraq, with a banner behind him that read "Mission accomplished."
The aircraft carrier has recently arrived in the region in the context of escalating tensions between Washington and Tehran, a year after US President Donald Trump withdrew from the nuclear deal with Iran and then adopted an unprecedented decision last April to include the Iranian Revolutionary Guards on the US blacklist of " Foreign terrorist ".
However, other Iraqis remain optimistic. Among them is Professor Issa Abadi, who wears a white hat and moves his glasses repeatedly to gather his ideas.
He expressed his hope for a "deal to resolve this crisis," especially as the two countries supported Iraq in one way or another.
Washington led the international coalition forces, whose air strikes were crucial to the elimination of radical organization over the past years.
Both sides assert that there is no intention of war, but that the road to negotiations does not seem to be paved between them.
According to Issa al-Abadi, "everyone must win the war and win the war, is to avoid it."