The logo for the health summit, PharMEdent. (Photo: Kurdistan 24)


ERBIL (Kurdistan 24) – The Prime Minister of the Kurdistan Regional Government (KRG), Nechirvan Barzani, in a speech he delivered during a medical conference on Wednesday, said that despite ongoing developments, the region’s financial difficulties in recent years have impeded widespread improvements in the public health sector.
The KRG’s goal “has always been founding a modern, effective, and serviceable healthcare system,” stated PM Barzani in a speech during the Kurdistan 24-sponsored PharMEdent 2019 event in Erbil, subtitled “Middle East Pharmaceutical, Medical, Dental Congress & Exhibition in Iraq.”
However, “budget cuts in 2014, the fight against Da’esh [ISIS], and the bad state of the economy negatively affected further advancements in the sector,” he explained. 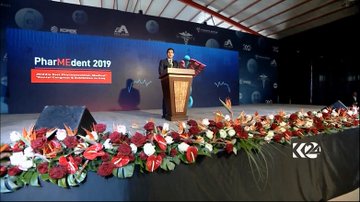 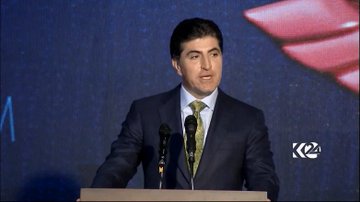 Dealing by multiple crises, especially from 2014 onward, the KRG’s finances became increasingly strained when the Islamic State overran a large part of northern Iraq and relations with Baghdad deteriorated, reaching a near-breaking point in late 2017, when Iraqi troops and militias took over disputed areas in response to the region’s independence vote.
Issues such as the central government cutting the region’s share of the national budget, the influx of almost two million displaced people and refugees to the region, and the fight against the Islamic State limited funding to various projects throughout the region.
With the formation of a new Iraqi government, headed by Prime Minister Adil Abdul-Mahdi, relations between Baghdad and Erbil have seen major improvements with the former now delivering the owed monthly salaries of employees in the region.
“The entire healthcare system in the Kurdistan Region and Iraq requires revision, renovation, improvement, and development,” for all of which the KRG has short-term and long-term programmes to address them. To further accommodate such schemes, Barzani affirmed that the health sector requires a larger budget.
Along with a livelier role for the private sector, the PM called for efforts in the area of “preventative” healthcare. “The media can play a better and more active role in increasing public awareness and knowledge on healthcare.”
On another point, Barzani stressed the importance of the private sector, with the experience of the advanced countries being the “living examples of this reality.”
Editing by Nadia Riva