This is what Saleh wants about choosing his deputies!

This is what Saleh wants about choosing his deputies! 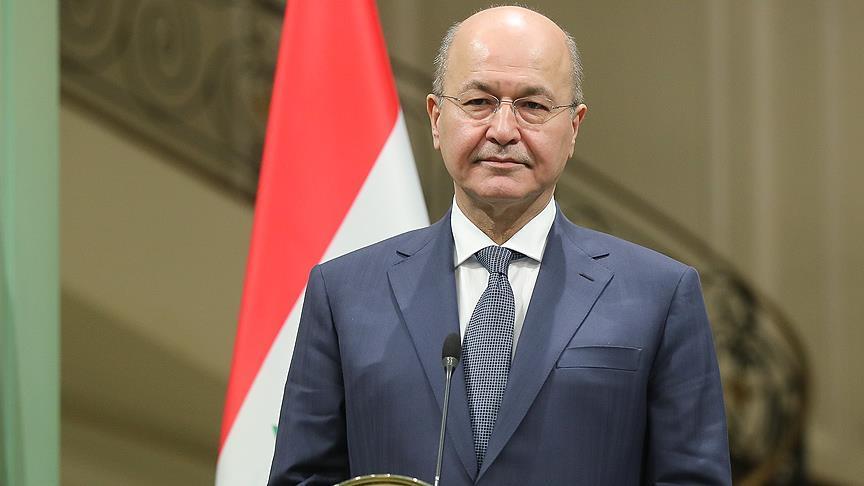 Political parties agree with the observers of the political scene, according to a report published by the new Arab newspaper, on Friday, the slack system of the presidency of the Republic of Iraq and the importance of rapid changes in it, especially in the presence of an army of advisers and general managers and presidential staff, In each election cycle, new advisers and staff are usually appointed or affiliated with the president's party, with figures that have not changed for nearly 14 years, most of whom were brought by the late President Jalal Talabani with him from Sulaymaniyah and Kirkuk, Override Some of whom are of legal age for retirement.
The report, which was read by Mawazine News, said that the changes being made by President Barham Salih within the presidential institutions, whose details have been leaked to the media, have raised questions about its purpose, whether it is an attempt to carry out reforms, "Legacy" of Talabani within the presidency.
Finally, leaks from the presidential system revealed a wide range of changes that Saleh initiated, ranging from the president's office to the presidential office, advisory board and other departments and departments, in line with reform calls and combating financial and administrative corruption in state institutions. However, the presidency did not disclose formally The president's spokesman, Luqman al-Fili, confirmed in January that "the presidency institution, since the receipt of Barham Saleh, is working to address the slowness in it," noting that "work is under way to take action Administrative and restructuring of the Presidency of the Republic And confidentiality. " This was followed by the rejection of the presidency last February, which was discussed on the appointment of former deputies Hanan al-Fatlawi, Mason Damluji, Hassan al-Sunaid, and Abdul-Karim al-Samarrai, advisers to the President with high salaries.
"They have consultants who work voluntarily and without pay," she said at the time.
For his part, a senior official in the office of Saleh, in an interview with "the new Arab", "Most of the changes that occurred were not in the form of punishment, but came at the desire of the president, who wanted to take responsibility for the most efficient," noting that "the changes affected officials And the heads of departments and advisers, some of whom have been referred to retirement, and the powers of others have been identified or transferred to other places.
He pointed out that "significant changes have been made in the Office of the President of the Republic and the advisory body, which saw the replacement of its members, who were appointed under the time of former President Fuad Masum, and the late Jalal Talabani," explaining that "the changes did not include the expulsion or dismissal of any director or Employee, but what happened is a change in locations, especially for people who have occupied their positions more than six years. "
"The changes also included the heads of important committees in the presidency and staff in important circles, including in the legal department and the protocol service," the official said. "The recruitment of a number of prominent journalists in the president's media office, During visits abroad. "
He explained that "Saleh informed his close associates of his desire to choose one deputy for him, instead of three as is the case."
For his part, a member of the parliament for a coalition of state law, Ali al-Ghanmi, to "pump new blood in the faces that are changed in the circles of the Presidency of the Republic," stressing the "new Arab," the need to "replace those who received positions or work assignments for long periods, Level of general manager and above. "
"This issue is not an exclusion, it is an attempt to seek different visions and ideas that contribute to the building of the state during the next stage," he said. "We certainly support the president's step, but the changes must be for reform, The best, not for personal or political purposes. "
For his part, the MP of the alliance of Sason, Burhan al-Mamouri, said in an interview with "The New Arab" that "various institutions of the state, including the presidency and the prime minister, include people who are not eligible for the sites they run," pointing out that " Efficient characters, and relying on experience, is evidence of his success. "
"We are against the idea of ​​choosing personalities in all institutions of the state, starting with the presidency and the presidency of parliament, in accordance with the common practice after 2003," he said. Seeks to preserve the balance between the basic components of Iraq. "
He stressed, "the need to choose competent and fair characters in important sites and sensitive places."
The post of President of the Republic Chervia in Iraq, since the US occupation in 2003, and does not have any executive powers. Article 71 of the Constitution also outlines the President's powers by ten points: the amnesty of a recommendation by the Prime Minister, except for the private right and those convicted of international crimes, terrorism and financial and administrative corruption, as well as the ratification of international treaties and conventions after approval by the House of Representatives. After fifteen days from the date of receipt. The Iraqi President shall also ratify and issue the laws enacted by the Council of Representatives and shall be ratified after fifteen days from the date of receipt thereof. It is also empowered to invite the elected House of Representatives to convene within a period not exceeding fifteen days from the date of ratification of the election results, and in other cases stipulated in the Constitution, as well as the granting of decorations and medals on the recommendation of the Prime Minister, in accordance with the law. It also has the task of accepting ambassadors, issuing republican decrees, and ratifying death sentences issued by the competent courts. The Iraqi President shall also assume the task of leading the Armed Forces for ceremonial and ceremonial purposes and exercising any other presidential powers mentioned in this Constitution.