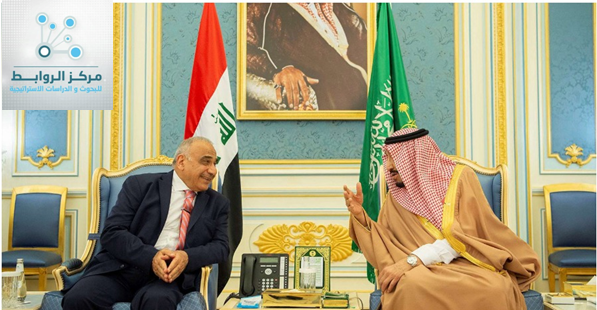 BAGHDAD (Reuters) - Iraqi Prime Minister Adel Abdul Mahdi's visit to Saudi Arabia last week showed signs of a serious desire for Baghdad to diversify its regional options. Trump's announcement - not long ago - not to renew the exemptions of Iran's oil sanctions when it expires in May next, pointing out that the decision aims to stop Iranian oil exports altogether, while depriving the regime of its main source of income.
Adel Abdul Mahdi met with Saudi King Salman bin Abdul Aziz, who expressed his satisfaction with the development and stability in Iraq and hoped that the visit of Abdul Mahdi to achieve the aspirations of the two countries to increase cooperation and upgrading relations to achieve the common interests of the two peoples.
For his part, Abdul Mahdi said that "his visit embodies the direction of the Iraqi government and its desire to develop relations with the Kingdom in all fields." He pointed out, according to a statement issued by his press office, that "the exchange of visits this high level opens wide prospects and achieve the aspirations of the two peoples and security and stability for all peoples Region".
Abdul Mahdi arrived in Riyadh with 11 cabinet ministers and about 60 senior officials in various fields, as well as a large delegation of businessmen, nearly 80 members.
The visit culminated in a series of mutual visits between officials of the two countries, during which a road map was drawn up to sign more than 20 cooperation agreements and memorandums of understanding in nine areas covering a wide range of concerns of the two neighbors.

There is no doubt that Iran is not comfortable with the visit of Prime Minister Adel Abdul Mahdi to Saudi Arabia, nor for any step in Arab openness, because it is eating from its cliff and opening some of the barricades that Tehran has kept closed around the neck of Iraq and believes that if snowball is rolled away from eastern Iraq, The loyalty of the armed militias and the supporters of the Iranian Revolutionary Guard and their reviews in the media, streets and cities will not disrupt the tearing down of the weak spider webs, no matter how great the leaders of the Tehran regime are in showing their greatness.
In return for the visit of Prime Minister Adel Abdul Mahdi to Riyadh, observers say that its importance does not depend on the number of agreements to be adopted, but the political results in the light of his recent visit to Iran and the extent of Iraq's ability to walk in a neutral area seems impossible.
The Iraqi prime minister finds himself in a difficult position, on the one hand, who wants to stabilize his approach from the Arab axis, especially from Saudi Arabia with diplomatic and economic weight. On the other hand, he does not want to clash with Iran's allies who control his government and various institutions.
On the eve of his trip to Riyadh, Abdul Mahdi said that his visit to Saudi Arabia will be like previous visits to Egypt and Iran, and "are important visits to show how Iraq works with its surroundings and the Arab and Islamic world." He stressed that "Iraq wants to be a great meeting point."
Observers believe that Tehran watched Abdul Mahdi's visit to Riyadh with apprehension, in light of the serious intentions shown by the Saudis in support of Iraq. It should be noted that the relationship between Iraq and Iran is a relationship based on the unilateral interest, where Tehran deliberately exploited Iraq to circumvent the US sanctions, Iraq is now viewed as a rare ally, which can contribute to easing the pressure of US sanctions by facilitating access to hard currency, opening up its markets to its goods and relying on it to buy its gas and electricity to meet its energy shortages.
Today, it is possible to speak calmly about the Arab depth of Iraq as a realistic definition of the political maturity of political convictions about the need to restore the imbalanced balance in Iraq's relations with its regional environment. This balance can not be guaranteed without acknowledging that the absence of Iraq and the absence of Arabs And that what can be called "Iranianism" in Iraqi party behavior has produced Iranian political and security influence in Iraq, but fails to achieve cultural influence by referring to Iran's support for failed political classes that advance Iranian interests over Iraqi national interests. Arab " Popular memory and devoted its contents, in the Shiite Iraqi pre-Sunni environment.
Therefore, it was remarkable that the Iraqi President Barham Salih, who is of Kurdish nationality, has devoted the term "Arab depth to Iraq" in most of his recent speeches as a kind of formal acknowledgment of the special relationship between Iraq and its Arab surroundings. And efforts to uproot them were not feasible.
Iraqi Studies Unit
Center for Research and Strategic Studies
http://rawabetcenter.com/archives/87519