Barzani meets Fayadh .. and areas covered by Article 140 on the table

Barzani meets Fayadh .. and areas covered by Article 140 on the table

[size=36]Barzani meets Fayadh .. and areas covered by Article 140 on the table[/size] 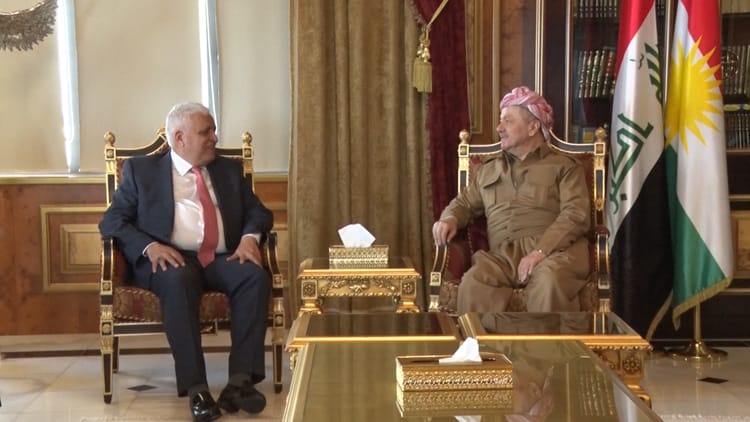 
The leader of the Kurdistan Democratic Party, Massoud Barzani, on Friday, with national security adviser Faleh al-Fayas Malfi eliminate terrorism and areas covered by Article 140 of the Constitution.
A statement by Barzani's office said that "the Iraqi national security adviser, Faleh al-Fayyad, received Salah al-Din
during the meeting and discussed the political situation in the region and the war against da'wah and steps to eliminate terrorism in Iraq
, Discussed the situation in the areas covered by Article 140 of the Constitution, and the efforts of the parties to solve the problems "
He said that" it was stressed the importance of coordination and cooperation between Erbil and Baghdad in the security areas and provide a better future for citizens. "

Re: Barzani meets Fayadh .. and areas covered by Article 140 on the table


Article 140
1) The executive authority shall undertake the necessary steps to complete the implementation of the requirements of all subparagraphs of Article 58 of the Transitional Administrative Law.
2) The responsibility placed upon the executive branch of the Iraqi
Transitional Government stipulated in Article 58 of the Transitional Administrative Law shall extend and continue to the executive authority elected in accordance with this Constitution, provided that it accomplishes completely (normalization and census and concludes with a referendum in Kirkuk and other disputed territories to determine the will of their citizens), by a date not to exceed the 31st of December 2007.


[size=36]The Kirkuk Statute and Article 140 of the Iraqi Constitution: Problems and Prospects[/size]


organized by Kurdish Institute of Paris

PROGRAM | REGISTER ONLINE
The fate of the province of Kirkuk since the 1960s is a bone of contention between the Iraqi central government and the Kurdish national movement.

Because of its rich oil deposits, this Kurdish province where until the 1970s there was not even an Arab cemetery was the subject of a policy of massive Arabization. The regime of Saddam Hussein deported his Kurdish populations en masse and implanted Arab settlers in their place. At the same time, the administrative map of this province was redrawn so as to detach from Kurdish districts and to connect Arab districts of neighboring provinces in order to increase the proportion of Arabs.

At the fall of the dictatorship of Saddam Hussein, far from seeking revenge or forcing a solution by force, Kurdish officials opted for the path of Law and Justice. After long months of dialogue and negotiation, a consensus was reached and recorded in Article 140 of the new Iraqi Constitution.

This article provides for the return to their homes of Kurdish deportees, repatriation, in return for financial compensation, in their provinces of origin of the Arab settlers forcibly and the organization of a referendum to allow the population of the province of Kirkuk to decide on its attachment to the Kurdistan Autonomous Region.

Article 140 provides for the same procedure for the Kurdish districts of the Mosul and Diyala provinces arbitrarily detached from Kurdistan and whose inhabitants also wished to be attached to Kurdistan.

The Iraqi constitution submitted to the referendum was approved on October 15, 2005 by more than 78 percent of voters across the country.

Five years later his article 140 is still not applied. Its implementation is considered the top priority by Kurdish politicians, while some states in the region and many Iraqi Arab leaders oppose it.

A stagnation of this issue carries the risk of a Kurdish-Arab conflict with unpredictable consequences.

The symposium on May 14 aims to take stock of the problems of the implementation of Article 140 by bringing together, for the first time in Paris, the President and members of the Iraqi High Committee for the Implementation of the Article 140 of the Constitution, the Speaker of the Kurdistan Parliament, Kurdish and Iraqi personalities as well as experts to contribute to the plural information of public opinion.

(A) The Iraqi Transitional Government, and especially the Iraqi Property Claims Commission and other relevant bodies, shall act expeditiously to take measures to remedy the injustice caused by the previous regime’s practices in altering the demographic character of certain regions, including Kirkuk, by deporting and expelling individuals from their places of residence, forcing migration in and out of the region, settling individuals alien to the region, depriving the inhabitants of work, and correcting nationality. To remedy this injustice, the Iraqi Transitional Government shall take the following steps:

(1) With regard to residents who were deported, expelled, or who emigrated; it shall, in accordance with the statute of the Iraqi Property Claims Commission and other measures within the law, within a reasonable period of time, restore the residents to their homes and property, or, where this is unfeasible, shall provide just compensation.
(2) With regard to the individuals newly introduced to specific regions and territories, it shall act in accordance with Article 10 of the Iraqi Property Claims Commission statute to ensure that such individuals may be resettled, may receive compensation from the state, may receive new land from the state near their residence in the governorate from which they came, or may receive compensation for the cost of moving to such areas.
(3) With regard to persons deprived of employment or other means of support in order to force migration out of their regions and territories, it shall promote new employment opportunities in the regions and territories.

(4) With regard to nationality correction, it shall repeal all relevant decrees and shall permit affected persons the right to determine their own national identity and ethnic affiliation free from coercion and duress.

(C) The permanent resolution of disputed territories, including Kirkuk, shall be deferred until after these measures are completed, a fair and transparent census has been conducted and the permanent constitution has been ratified. This resolution shall be consistent with the principle of justice, taking into account the will of the people of those territories.

Baldawi: Fayyad talks in Erbil focused on filling the security gaps with Baghdad


Baldawi: Fayyad talks in Erbil focused on filling the security gaps with Baghdad

The MP for the coalition of construction Mohamed Baldawi, Saturday, that the talks of the Chairman of the Popular Assembly of the National Security Adviser Faleh al-Fayadh in the Kurdistan region focused on filling the security gaps between the Kurdistan region of other provinces.
Al-Baladawi said in a statement that the visits of the head of the Popular Assembly, National Security Advisor Faleh Al-Fayadh to the Kurdistan region aims to bridge the security gap between the region and the provinces, as well as coordination in the order of the administration of Sinjar district.
He added that "the federal government seeks to end any terrorist threat in the security spaces between the region and the center because it will cause a security disaster similar to what happened in the fall of Mosul."
Baldawi said that "talk about the surrender of the Peshmerga forces responsibility for the mixed areas is inaccurate and aims to stir up national strife and create a new crisis between Baghdad and Erbil."