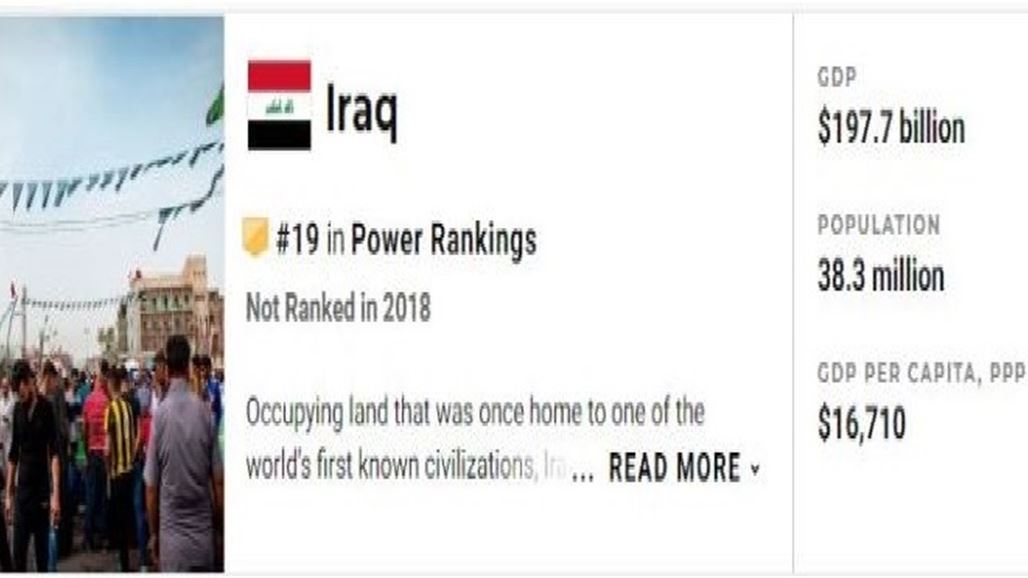 the United States retained its position as the strongest country in the world for the current year 2019 according to the annual ranking, followed in the list of Russia, while Saudi Arabia was ranked ninth, while Iraq was ranked 19th most powerful oil reserves.

Saudi Arabia ranks ninth among the top 25 countries in the world in 2019, while the United States and Russia are ranked first and second respectively, according to US News Reporter.


The report surveyed more than 20,000 people from 80 countries around the world and was prepared in collaboration with the University of Pennsylvania.

The report was based on an assessment of the strength of countries on the size of their economies, their political impact on the global level, and their military capacity, which depends on the size of the defense budget in each country.

The magazine says the rating also includes the level of world confidence in each country, which is reflected in its credibility in meeting its international obligations.

The following are the most powerful countries on Earth, according to the rankings this year:


1. The United States, "the most dominant

The magazine described the United States as" the most powerful economic and military power in the world, "and also has a great cultural impact on the world because of how to express popular culture in books Movies, music and television programs.

She said that the political decisions taken by President Donald Trump raised questions around the world, even from Washington's closest allies on the future course of the United States on the world stage.

Russia is the largest country in the world in terms of area, and shares borders with more than 12 countries, and its strength comes from the lasting influence of the Soviet Union and the economic batch that comes from oil and coal reserves owned.


with the world's largest population and the second largest economy in the world, has seen an amazing economic development, but millions in China still live below the poverty line, the World Bank said.

Germany has the largest population of all EU countries and has a very skilled workforce. Chancellor Angela Merkel has faced challenges to her strength and has resigned as leader of her party, but Germany continues to play a leading role in the EU and other international organizations.


The United Kingdom is exerting great influence and

told the magazine in its report that it noted that the United Kingdom is exerting great economic, political, scientific and cultural influence internationally in the world despite the new questions and concerns about its role on the world stage after it voted for the leadership of the European Union.

The UK's colonial past continues to strengthen its influence, and London is one of the most visited cities in the world.


6. France .. the oldest countries in the world

France is one of the oldest countries in the world, and its scope extends around the world through science, politics and economics , and perhaps above all, culture.

The French economy is one of the largest economies in the world, although US News pointed out that it faces domestic challenges, including how to deal with terrorism and attitudes towards Islam.

Japan is one of the world's most powerful countries in terms of education, culture and the most technologically advanced, and has the third largest economy in the world, US News reported.

The report said that the occupation is "the only Jewish state in the world, a small country located on the eastern shore of the Mediterranean Sea, for its relatively small size, the country has played a major role in world affairs and has a strong economy."

9 - Saudi Arabia "the giant of the Middle East"

In a report on the world's most powerful and influential nation in 2019, the magazine said Saudi Arabia is an economic power and political weight making it one of the most influential countries on the global level.

Saudi Arabia, which he describes as the "giant of the Middle East," has a vast territory, and the Arabian Peninsula's wealth is concentrated within its geographical boundaries.

In addition, millions of Muslims, who wish to perform Hajj in Mecca, visit the city, which witnessed the birth of their Prophet.

Saudi Arabia's gross domestic product (GDP) exceeds $ 683 billion, with an average per capita income of $ 54,000 per year and a population of 32.9 million.

It is the world's seventh-largest exporter and is ranked 11th in the world as the strongest economy, a major source of technology and automobiles, and is a member of many international organizations such as the G20 and the World Trade Organization.

The United Arab Emirates (UAE) fell one place compared to last year. The World Economic Forum described the UAE economy as the most competitive economy in the Arab world, while the CIA's Global Factbook said per capita output The GDP is on par with its counterparts in the leading Western European countries thanks to its oil reserves.

Canada is the second largest country in the world and has the fifth largest oil reserves in the world.

According to US News, Iran has long been the focus of world powers because of its strategic position in the Middle East and has plenty of oil and other natural resources.

Switzerland has three higher salaries, compared with 2018, when it ranked 17th, and is one of the richest countries in the world and one of the highest gross domestic product in the world.

It is also worth mentioning that the banking sector enjoys the privacy of customers more than many other countries and has many international organizations in the world.

Australia is a rich country with a high lifestyle qualitatively, which in many of the leading international organizations member.


16. Turkey is the fastest growing country

is the world's largest democracy and plays an important role in global technology industries. India also has a huge cultural impact.

"The Bollywood film industry in Mumbai is making films longer than any other country in the world and has dropped two rankings in 2019 compared to 2018," US News said

The Italian economy is one of the largest economies in Europe, although it has slipped into recession by the end of 2018. Italy has a great cultural influence, from well-known artists to fashion houses.

19- IRAQ: Oil
Reserves Iraq was not ranked as the most powerful of 80 countries in the world in 2018, but was ranked 19th in 2019, and Iraq is a member of international and regional organizations such as the International Monetary Fund, the League of Arab States and the Organization of Islamic Cooperation.

The World Bank notes that Baghdad's economy is unstable, even if it has one of the world's largest crude oil reserves.

is one of the richest countries in the world. It has a skilled workforce and Singapore faces concerns about rising costs of living.


As one of the four Asian economic tigers, Singapore has seen impressive growth in recent years as effective manufacturing and production methods have opened up a free market in e-industries and booming pharmaceutical industries, US News reported.

and Sweden has fallen two places in the ranking compared to 2018, where it was ranked 19.

Sweden is one of the largest countries in the European Union and has a global leadership in the field of respect for human rights.

Pakistan is one of the world's most populous countries, and its youth is the majority for the average age. However, conflicts with extremist groups and increasing tensions with India over the disputed Kashmir region have hampered their development.

: The US News reported that Spain recovered from the financial crisis despite its flexible export market and EU-funded restructuring efforts.

Despite the growing separatist movements in the Basque Country and the threat of Catalonia, Spain has a great cultural influence through its achievements in arts and dance.

in oil and gas, making it one of the richest countries in the world. Education and health care are free. Doha is hosting the 2022 World Cup

Belgium is not ranked among the 80 most powerful countries in the world in 2018, but it is ranked 25th in 2019. This small, highly developed country is one of the six founding nations of the European Union and hosts international organizations such as NATO and the European Council.