With the participation of Iraq .. Launch of the 29th session of the Arab Parliamentary Union in Amman

With the participation of Iraq .. Launch of the 29th session of the Arab Parliamentary Union in Amman


With the participation of Iraq .. Launch of the 29th session of the Arab Parliamentary Union in Amman

Speaker of the House of Representatives Mohamed Halboussi discussed with Speaker of the Syrian People's Assembly Hammouda Sabbagh during their participation in the Arab Parliamentary Union conference the regional situation and cooperation between the two countries.
"During the meeting, the bilateral relations between the two countries were discussed, efforts were exerted to activate friendship committees, joint parliamentary work and the efforts to activate parliamentary diplomacy," the Information Office of Halaboussi said.
Jordan will host the Arab Parliamentary Union Conference on 3 and 4 March 2019.
The meeting is entitled "Jerusalem the eternal capital of the State of Palestine", where the heads of parliaments and delegations are scheduled to address the subject.
The conference will be preceded by a consultative meeting of the heads of Arab parliaments to advance coordination on the themes and events of the Conference 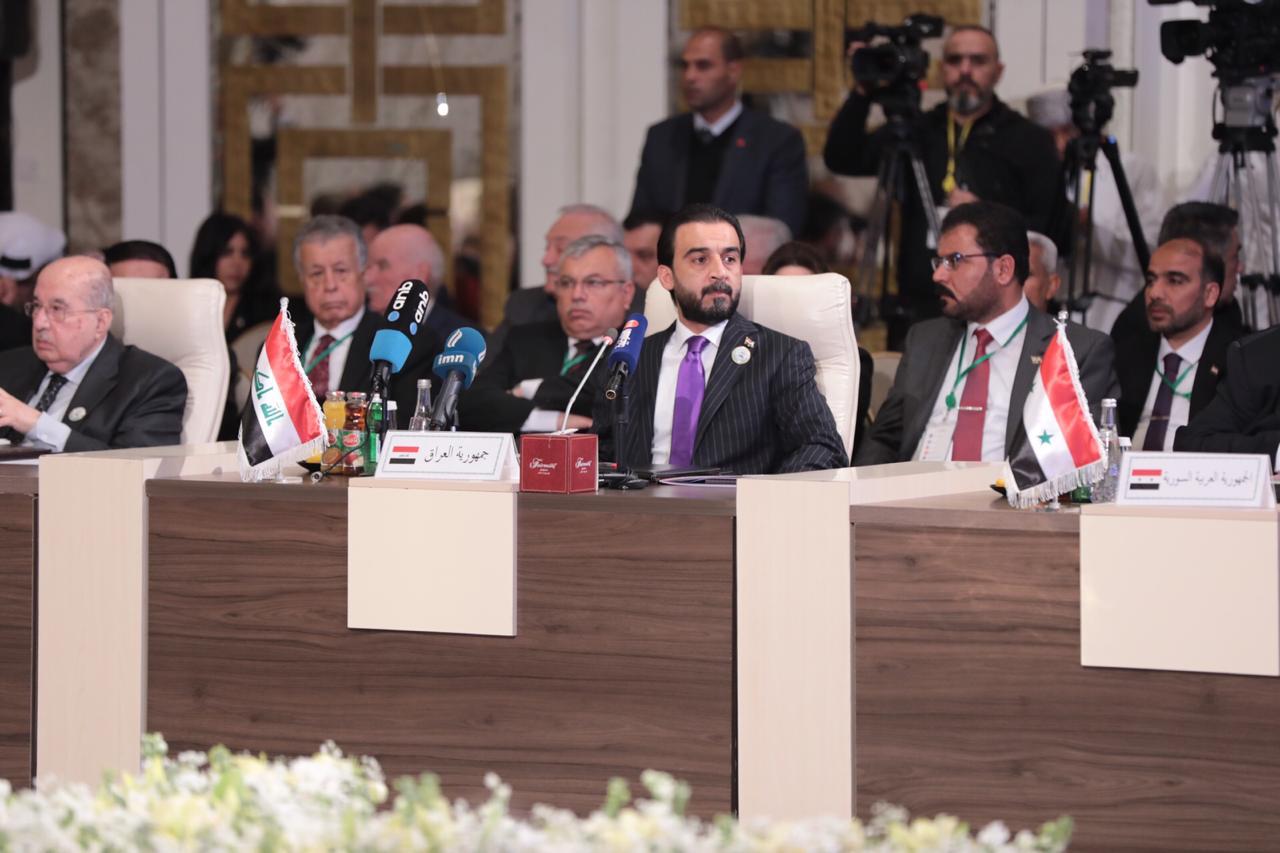 The speaker of the House of Representatives Mohamed Halboussi on Sunday called on Arab parliaments to take new steps with the development of a unified Arab project that begins with legislation that represents the will of the Arab peoples and moves to a roadmap for governments and Arab and Islamic countries to support Jerusalem.
"It is a pleasure for the Arab community to be reunited in the homes and hospitality of the original Hashemites, the legitimate guardians of the Islamic holy sites in Jerusalem, and the brothers who have been sincerely seeking to support," Al Halbusi said in a speech at the 29th Arab Parliamentary Union. To meet the Arab House on every occasion and incident, and I thank you for the warm hospitality of the original Arab, I do like praising itself. The Iraqi-Jordanian community extension is too deep to be defined by borders or the map's drawings are different.Harmony and communication enjoys the love and adherence to the two brotherly peoples of Iraq and Jordan. "
He expressed his "thanks to all the heads of the councils and delegations who insisted on achieving the meeting in such a way that is consistent with the magnitude of the challenges and circumstances surrounding us in general and the issue of Al-Aqsa and Palestine in particular."
He added that "our region is living in the midst of deep crises, continuous tensions and many dangers that require avoiding all that would enrich and consolidate the feelings of frustration that lead to extremism and terrorism and undermine the stability of the region and weaken the hope of reaching a situation acceptable to the countries and peoples of the region. "Unfortunately, in the light of all that is happening, we are still going in the context of these complex developments and the various disturbances in the Middle East, where the fateful and fundamental issue of the nation is in a closed position, Problems without finding a real solution for the people who continued to challenge for their legitimate right to establish their independent state with Jerusalem as its capital. "
"Unfortunately, the Israeli regime is still insisting on a policy of devising a fait accompli, violating international legitimacy, ignoring all its documented commitments and violating all the principles of human rights and international humanitarian law on a large scale through the terrorist practices that have become addicted to it and become a context In his daily performance towards the Palestinian people. "
"We are not in the process of presenting our emotions, feelings and personal feelings when we see scenes of Israeli barbaric violence against our Palestinian people, while we must take new steps with a unified Arab project that begins with legislation that represents the will of the Arab peoples and turns to a roadmap for governments and Arab states. And Islamic, "stressing:" Because when we unite our case in the issue of Jerusalem from the strategic point of view of the other will have to think about the response to some degree, he can never evade the face of the will of the people together on the Days if action must be taken of financial and political measures and urgent and effective activation of the financial funds established in order to protect Jerusalem in the face of threats to our holy places and to address the policies of ethnic cleansing. "
"The right of the Palestinian people to establish their independent state with Jerusalem as its capital on all of its territory is a historic and inalienable right. Today, we must take clear and firm positions that are part of a common and effective strategy to ensure this right and to support its practical steps. We are obliged to spare no effort to continue our efforts to put an end to the policies of the Israeli occupying entity, which aims at obliterating the identity of Jerusalem, as well as confronting all procedures. Biased approach taken by this party to consolidate this unacceptable situation. "
Al-Halbusi stressed that "the Iraqi position on the issue of Jerusalem is one position of the people, the government and the parliament. The Iraqis have a firm vision of this fateful and historic issue and our position is firm and will not change in the establishment of an independent Palestinian state with Jerusalem as its capital." He called for " Of our brothers in Palestine and a meeting of us in the Palestinian territories to reach a clear and explicit message to the prisoner that we will not leave our cause and the prisoner will not remain under this incarcerated jailer. " 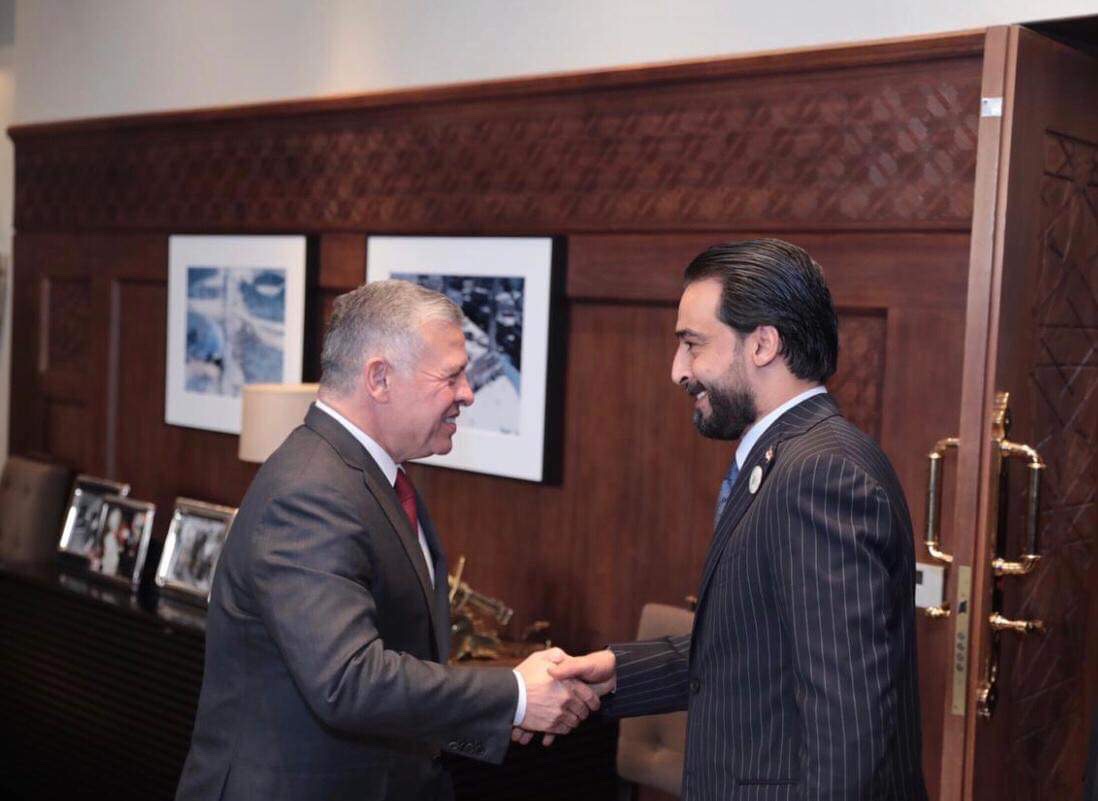 The Speaker of the House of Representatives, Mohammed Al Halbusi, met on Sunday with a delegation of the Hashemite Kingdom of Jordan King Abdullah II on the sidelines of the Arab Parliamentary Union Conference.
During the meeting, they discussed the development of bilateral relations between the two countries and issues of mutual interest.
"Iraq, which fought a war against terrorism on behalf of its brothers and the world, must unite all efforts to support and stabilize it, which will contribute to the stability of the region," Parliament Speaker Muhammed Halaboussi said in a statement. With Iraq. "
He also stressed the need to expand the horizons of cooperation between the two countries in all fields, foremost of which is security and reconstruction in the interest of the two brotherly peoples.
For his part, His Majesty reiterated the Kingdom's support for Iraq, expressing his country's readiness to contribute significantly to achieving greater security and stability.
Ended
m h n Speaker of the House of Representatives Mohamed Halboussi met on Monday with his Jordanian counterpart Mr. Atef Al-Tarawneh and Egyptian Mr. Ali Abdel-Al.
A statement received by the "news" that "Halabousi discussed during the tripartite meeting, which gathered on the sidelines of the Arab Parliamentary Union conference to discuss the latest developments in the region."
He added that "the unity of positions and visions in international forums on Arab issues of common concern, as well as coordination of efforts in the fight against terrorism and the reduction of extremist thought, was stressed." The meeting discussed enhancing cooperation in the economic field.