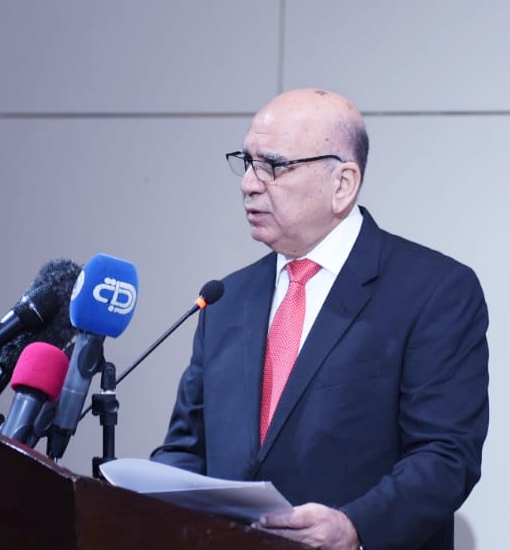 Mr. Chairman of the esteemed meeting
Your Excellencies,
Peace be upon you,

Allow me first of all to extend my sincere thanks to the forum moderators. I have the honor to participate and also express on behalf of the delegation that we are happy to be among you and to participate in this important and useful discussion and dialogue.

In the context of the discussion of the "coordination of monetary and financial policy" in Iraq, we will briefly and briefly refer to some applied models, but before that it is necessary to refer to a certain background related to the political and security conditions experienced by Iraq.
Iraq has faced great and serious challenges and these have affected the whole aspects of life in Iraqi society.
These challenges have produced a delicate and vulnerable situation and for a certain period the economic fundamentals in general and finance in particular. The most important challenges faced by the Iraqi society were:

1. The occupation of the terrorist forces by one third of Iraqi territory and control of some oil wells as well as many banks or government and private banks and their contents in mid-2014.

2. The oil shock, which coincided with the period of offensive attack and beyond, as oil prices fell suddenly and strongly, resulting in the creation of a financial crisis as a result of a sharp drop in imports.

3. With the poor security situation in 2014, and continued fighting in 2015, many investment companies and investors left Iraq.
Among the areas left by the Kurdistan region where there was a strong investment movement and promising before 2014 and this decline by investors led to negative effects on the economic situation in the Kurdistan region and the whole of Iraq.

Therefore, we were faced with a unique and strange phenomenon, in which a concerted attack coincided with a severe financial crisis and an impulsive war imposed on the state a high increase in expenditures, especially on the military level and the development of the Iraqi economy in general and financial Iraq in particular in the service of the battle. The situation of the militarization of society has greatly affected the economic and financial situation of the state and to manage the crisis and access to some solutions The Iraqi government entered into negotiations with governments and international financial institutions to obtain loans and at the same time took some steps and procedures to ensure the salaries of employees and ensure the existence of liquidity in the market . The steps taken in the context of coordination between fiscal and monetary policy are many and refer to some of them, and clarify some of the lessons learned from the experience that passed through Iraq, especially in the period between 2015-2018.
1. In order to provide liquidity to finance the fiscal deficit and credit orientation towards the requests of the Ministry of Finance, the steps were taken:
a. The Central Bank suspended the open market operations, especially the issuance of remittances and sell them to commercial banks in order to allow the Ministry of Finance to sell treasury transfers to commercial banks and reduce the competition for credit
B. The approval of the Central Bank of Iraq to transfer from the legal reserve from cash to securities (remittances or bonds) and this provided cash money managed by the Ministry of Finance to borrow, in addition to reducing the proportion of legal reserve after.

2. In order to maintain the net foreign assets of the Central Bank of Iraq at levels that support the exchange rate, the following procedures were taken:
a. The Ministry of Finance has pushed public expenditure to reduce and reduce demand for foreign currencies
B. The Ministry of Finance to borrow cash from abroad to support the budget through: -
- Issue of foreign bonds
- Cash loans from the World Bank
- Cash loans from Japan International Cooperation Agency
- Cash loans from the French Development Agency, these loans contributed to support net foreign reserves.
3. In the field of exchange rate was coordinated between the Ministry of Finance and the Central Bank in order to maintain the stability of the exchange rate and not to resort to devaluation of the currency, and has been maintained stability of the exchange rate of the Iraqi dinar, and this has a positive impact economically and socially.

4. Ease the burden on local credit.
The Ministry of Finance has taken measures to increase non-oil revenues in the framework of simplifying the procedures for collecting customs duties by reducing their categories, lowering the upper limits for tax identification and improving tax collection. This has led to increased public revenues and reduced demand for treasury remittances.
These were some of the experiences experienced by the Iraqi government in the context of coordination between monetary and fiscal policy
Thank you for listening and peace be upon you

Minister of Finance meets in Majd Shweika, Minister of Tourism and Antiquities in the Hashemite Kingdom of Jordan

[size=30]Minister of Finance meets in Majd Shweika, Minister of Tourism and Antiquities in the Hashemite Kingdom of Jordan[/size]

The Deputy Prime Minister and Minister of Finance Fuad Hussein Majid Mohammad Shweikeh met with the Minister of Tourism and Antiquities of Jordan on the sidelines of the 4th Arab Public Finance Forum held in the United Arab Emirates.
During the meeting, they reviewed the distinguished bilateral relations between the two countries and urged activating joint cooperation in the tourism sector, especially medical tourism, and facilitating the granting of entry visas to Iraqis seeking treatment in Jordan.
She said that the Jordanian government will facilitate the granting of entry features and find quick solutions in this regard, either through electronic advance or other solutions that facilitate the transfer of citizens between the two countries.