Mnt Goat: "It is a “reinstatement” that occurs that eventually gives the dinar back it former rate (glory days) plus more"

Mnt Goat: "It is a “reinstatement” that occurs that eventually gives the dinar back it former rate (glory days) plus more"

We all are aware that the dinar, as it stands today, is worth much more than the program rate now assigned by the CBI. But this higher rate must be realized by supply and demand for the currency. Just be reducing the amount of dinar in circulation down from about 150 trillion to 44 trillion dinars alone is showing us the CBI is serious about this plan.  It is only when the dinar is re-pegged to the SDR basket and then gets reinstated to the open market trading platforms once again, as it was in pre-war days, that the dinar can potentially go to a much more substantial rate. Many call this the “revaluation” or RV but technically an RV never really happens. It is a “reinstatement” that occurs that eventually gives the dinar back it former rate (glory days) plus more.

@Mnt. Goat wrote:Just be reducing the amount of dinar in circulation down from about 150 trillion to 44 trillion dinars alone is showing us the CBI is serious about this plan

The CBI never had 150 trillion Dinar in circulation... 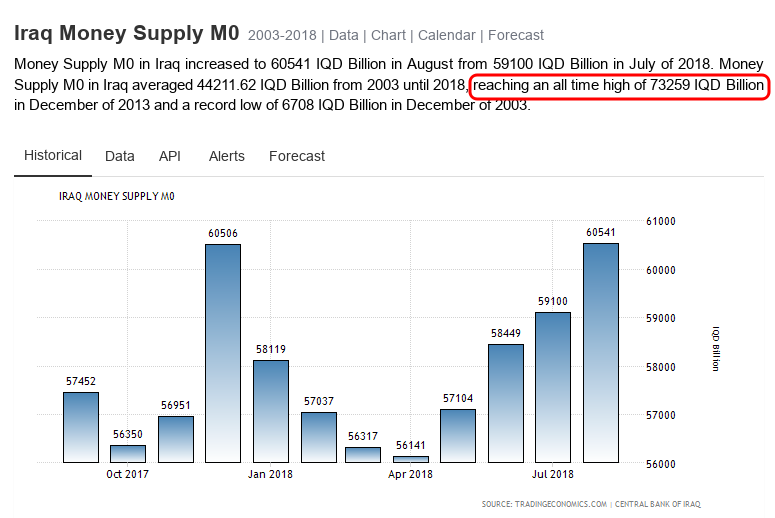 Ummmm.. how many times did MG drop off the net having exchanged/cashed out.... or whatever?  Once that I remember.  Thought I heard one previously through anecdote...

So much BS to address here.

1.  As I've pointed out numerous times, the "program rate" is not an artificial rate imposed on Iraq.  It is simply the exchange rate that the IMF goes by in monitoring the financial condition of every nation they loan money to, and it is based on the rate established by the central bank of that nation.  They determine that rate based on the money supply and the reserves used to back that money, so it's not artificial.  It's quite real.
2.  As Nash has already pointed out, Iraq's money supply has never exceeded 73 trillion or so.  The 44 trillion figure that MG is using represents the non-electronic currency in circulation.  In other words - CASH!  And as Marcus Curtis has pointed out, the vast majority of that cash is outside of the country because they've been exporting it to speculators in order to bring in US dollars.  So no ... they haven't reduced the money supply from 150 trillion to 44 trillion.
3.  The dinar was always pegged.  It was never openly traded and supported by market forces.  The reason is simple.  Nearly 90% of Iraq's GDP is based on oil revenues, and since the price of oil fluctuates so unpredictably, Iraq (like all of their oil-based economy neighbors) has to peg their currency in order to maintain exchange rate stability.  Without that stability it would be virtually impossible to budget, to plan, and to attract trade and investment in their country.
4.  No, an RV or revaluation isn't based on "open market trading".  It's based on the decree of the central bank of the country producing the currency.  Open market trading is only done with free-floating currencies like the US dollar, the GB pound, the euro, the yen, the Canadian dollar, the Aussie dollar, the Russian ruble, and the Brazilian real.
5.  There is no such thing as the reinstatement of a prior exchange rate of a currency.  There is no such thing as the reinstatement of a currency period, except for a very rare situation like the one that occurred with the Kuwaiti dinar where Saddam's currency replaced it during the occupation of Kuwait.  Once Saddam was kicked out of Kuwait, the Kuwaiti dinar was reinstated as the nation's currency at the same exchange rate as it held prior to the occupation.  The whole thing played out in about 6 months.  The war in Iraq ended 15 years ago, and the dinar in use before the war has already been replaced by the IQD.  Insurance policies and driver's licenses might be reinstated, but former exchange rates aren't.
6.  The glory days referred to in those articles from 2011 and earlier were always in relation to the currency reform plan of the CBI which is a lop.  By removing three zeros from the currency they would replace the IQD with a value of about $.00085 with a new currency with a value of about $.85.  That's a redenomination, not a revaluation.  Iraq has never stated that they will raise the value of the IQD in order to restore its former glory.  Yes, the old dinar of the 1970s had a value of $3.00+, but Saddam drove the value of that currency into the ground by spending the currency reserves to fund the war with Iran in the 1980s, which caused the hyperinflation that caused the 3 zeros to be added in the first place.

Once again, Mountain Goat (Ken Siegel or somebody associated with Dinar Recaps) is spreading old rehashed lies as a way of keeping hope alive and dinar speculators hooked on hopium.  It's a disgusting business model, generating ad revenues by promoting a currency scam.
*****************
Busting Gurus Since 2011