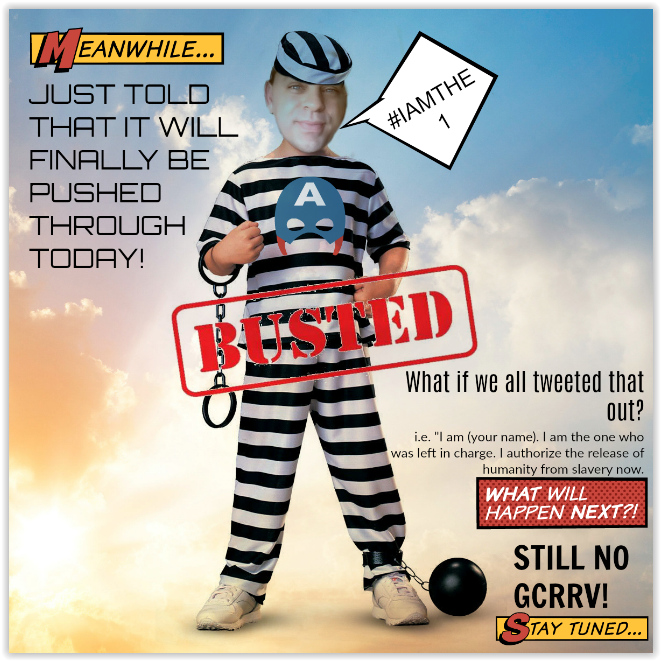 Recently, public statements were made by Thomas Williams that forced Kimberly Goguen, Trustee for the Manna World Holding Trust, to disassociate herself from him. I was not consulted in her decision making process, nor did I contribute to bring her attention to these statements in any way. Kim provided me the complete statement directed to the general public as well as the US Government. She asked me to post the letter and I did.

I am in full support of the action that Kim had to take to preserve the integrity of the work she has done. My relationship with the Trustee is based on private project funding, a common goal to liberate humanity, and the desire to restore the Natural vitality of the planet. The action or appearance of anything that will hinder this mission, whether it’s human error, slanderous attacks, or lies spread by the Order to cast doubt, have to be identified and eliminated to ensure the return of Natural Order.

I will not support any action or language that directly or indirectly implies the over throw of any Government. I am in full support of President Trump and his willingness and dedication to take down the “Deep State”. I am in full support of Kimberly Ann Goguen, the principles she stands for, the mission she is driven by, the manner in which she executes her duties, and various roles she plays.

As we have all witnessed and continue to experience, the Cabal will use anything they can to try and discredit, disprove, and cast doubt on our efforts. This is a war of words between experts in Corporate Governance who have tricked humanity several times before into contractual agreements to sell ourselves into slavery, and a resistant group of Patriots and other beings who have remembered in part who they are, and refuse to live as slaves knowing this is the moment when they can claim their freedom.

Knowing the importance of this transition we move with the utmost respect for our oppressors, recognizing the control systems they have built over thousands of years are still in place in many aspects of our life. Every thought we have, word we speak, and action we take is a reflection of the choice we’ve made to be a slave or to be free.

The language we use and the actions we take are heavily scrutinized and easily taken out of context to be used against us. I mention this as a gentle warning to consider what you say in public as it becomes a matter of record. This can work for or against us based on what we’ve said.

The below statement was sent to me from multiple sources referring to the sentiments expressed by Thomas Williams within his group on the Social Media platform “MeWe”.

“As for Tank I am not surprised he sent people knowingly or not asking Kim to replace me as spokesperson for the trust last month with him in my place, maybe now he will get his wish, time will tell.”

To be clear: I have not knowingly sent anyone to “the Trust” asking Kim to replace Thomas as the Spokesperson. I was not even aware that this was an actual role to seek after.

I’m not sure how I could have sent someone not knowingly because I don’t know. But to my knowledge, I have not done that either.

I do not glory in this moment having Thomas disaffiliated with Kim or the Trust. To my knowledge Thomas has served as a Champion for Kim’s efforts up to this point,I have never had a negative interaction with him personally, and have nothing negative to say about him.

Thomas and I have different views on how to change the world, how to empower people, and how to speak in public.

I am grateful to be aligned with Kim and the mission of the trust. I have known for a while now that she is an advocate for the people, for freedom, and for the planet. I know she’s more than that too, but I respect the tone that she has set with her humility, and I do my best to act accordingly.

She has been a friend and a teacher, and I have paid careful attention to get the most out of this experience.

I am not loyal to people just because I care for them. I do not blindly follow orders, or worship anyone as an idol. I don’t need an intercession between me and God. I am loyal to principles and act accordingly. This loyalty has cost me many friends, jobs, relationships, and my former reputation. I have followed this path knowing I want to create a better world, and I’ve willingly given all that I have to earn the right to have a seat at the table.

I practice confident humility. I’m confident that whatever role I’m allowed to play that I will be empowered with the substance, the character, the wisdom, and ability to perform in the best interests of the people and the planet. At the same time, I’m humbled by the opportunity and recognize the value of the gift.

I recognize the charge, the weight, and the beauty of being part of this transition. I have not jockeyed for position to put myself above or 8beneath anyone. I have endeavored to align myself with God, follow the signs, grow in every aspect of my life, share what I’ve learned along the way, and conduct myself in a manner that is worth replicating. I have not always been successful in my endeavors, but I have continued to improve over time.

I have not tried to take anything from Thomas or play the role that he played. I am Sovereign and I express myself, as myself, based on my own experiences and perception of the circumstances. In my opinion and understanding, the Trustee has drawn a definitive line between the operation and duties of both her and the Trust, and that of Thomas Williams.

My understanding is that this action was based on statements made by Thomas Williams on September 27th, 2018 that implied that Kim and the Trust should theoretically act as an interim Government in the event that President Trump was somehow removed from his position. The headline description of the two hour show was posted on a YouTube Channel named Lucid Dreamer, who chose to focus on these statements to identify the substance of what was discussed.

This was an unfortunate series of events that had nothing to do with me in anyway. At this time, because I do work with Kimberly Goguen, and will continue to work with the Trust in the future, KRE8CHANGE, the SPEAK PROJECT, I and any of my affiliate organizations will not associate with Thomas Williams in any way.

The prize is our freedom. Failure is not an option. Stay the course. Be encouraged. Compromise for no one.