You're on your own, US tells Syrian rebels, as Assad goes on offensive

You're on your own, US tells Syrian rebels, as Assad goes on offensive 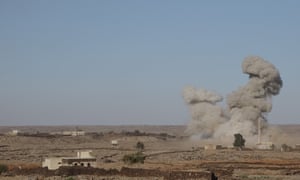 
The US has warned Syrian rebels in the south-west of the country they should not expect military support to help them resist a major government offensive.


The message from Washington comes as Russian jets struck an opposition-held town on Sunday in the first air cover provided by Moscow to an expanding Syrian army offensive in the strategic area bordering Jordan and the Israeli-occupied Golan Heights.


The US message sent to heads of the Free Syrian Army said Washington wanted to make clear that “you should not base your decisions on the assumption or expectation of a military intervention by us”. 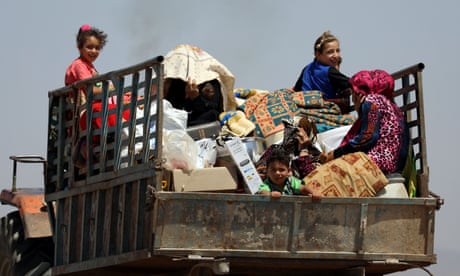 
The Syrian army began ramping up its assault last week in order to recapture the area.


Washington had warned the Syrian president, Bashar al-Assad, and his Russian allies that violations of a “de-escalation” zone agreed by the US and Russia last year would have “serious repercussions” and pledged “firm and appropriate measures”.


The US ambassador to the UN, Nikki Haley, said on Friday the Syrian military escalation “unambiguously violates” the de-escalation arrangement.


“Russia will ultimately bear responsibility for any further escalations in Syria,” Haley said in a statement.


The strongly worded statements had raised the hopes of the western-backed opposition of a possible American military intervention in the event the Syrian army’s days-long bombing campaign broadens to an all-out offensive across the south-west.

But the US message told the rebels it was left to them alone to take the right decision on how to face the Syrian army’s military campaign based on what they saw was best for themselves and their people.


“We in the United States government understand the difficult conditions you are facing and still advise the Russians and the Syrian regime not to undertake a military measure that violates the zone,” the message also said.

“We have tracked a sortie of five Russian jets that performed 25 raids,” said one source, adding the jets had set off from Russia’s Hmeimim airbase in the western coastal province of Latakia.


Syrian government forces had so far made heavy use of artillery and rockets in the current assault, and Russian warplanes that were critical to the recovery of other rebel-held areas had not been deployed until now.

The US demolished Raqqa when they 'liberated' it. Who will rebuild it?
Molly Crabapple

Rebels in southern Syria have received support, including arms, from Assad’s foreign foes during the seven-year-long war, but analysts believe the aid has dropped off after the US president, Donald Trump, shut down a program run by the CIA last year.


Unless an agreement is reached between Moscow and Washington over the fate of southern Syria, a big offensive risks an escalation that could draw the US deeper into the war. South-west Syria is of strategic concern to US allies Israel and Jordan.

Yesterday at 11:56 pm by RamblerNash

Yesterday at 11:54 pm by RamblerNash

Yesterday at 11:30 pm by RamblerNash

Yesterday at 7:51 am by Jayzze