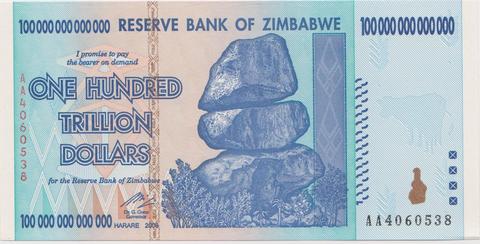 To ZIM or not to ZIM, that is the question. Rather tis nobler to exchange than do without.

Following is one little person's opinion... take with salt, please. :-)

The Zim was originally publicly offered by the government of Zimbabwe as a currency, meaning it could be used to buy and sell goods and was backed by the country's central bank. Consider though, the verbiage printed on the note, "I promise to pay the bearer on demand (one hundred trillion dollars) for the Reserve Bank of Zimbabwe." Whether it is a bond or a note mattered not when it was originally printed since it was used as an instrument for buying and selling goods. What matters is today, this very minute, and how much will someone give you for it? How much can it be bartered for? How much can one 100 trillion dollar note be insured for?

I have heard that Lloyd's of London has insured 1, 100 Trillion dollar note for $0. 16 after dropping 6 zeros. That's 16 M for every one hundred trillion ZIM note. This insurance wrap will allow multiple Quad (10 x 100 T=160 M) to be traded in a platform in Hong Kong, for instance. A typical example of a platform trade of an "instrument". Whether labeled a banknote, a bond, or an instrument it means the same. So where's the distinction?

Today the Zimbabwe 2008 notes found on the internet are labeled "DEFUNCT AND NOT LEGAL TENDER ANYWHERE. ZIMBABWE NOTES HAVE NO CURRENCY VALUE." No bank anywhere is exchanging these "defunct" notes. If this is the case then how could Lloyd's establish a value? The only possible way is that an inviolable source verified it at this rate (similar to UST). Or, it was backed by a proven asset at this amount with their hard, verified asset. Either way someone somewhere verified that the value was 16 million USD for every 100 T banknote.

Try and get this same value for your zim in most any bank in the world and you will most likely be laughed at. It's been a conspiracy of the privileged few. If you had the necessary dollars to pay for the wrap, and the backing instrument, plus the relationship with a settlement house and so forth you might manage this deal. A billion dollar platform might cost 18 M, give or take a few million dollars. It's an exclusive good old boys club though, by invitation only.

All of this exclusivity potentially changed when AIIB entered the scene. The AIIB, (Asian Infrastructure Investment Bank) was formed as a vehicle to supplant the IMF. Many are unaware that the IMF is the world's largest collection agency. Their job is as an enforcer. As these nations/governments issue bonds to float their infrastructure or recover from catastrophe, (or simply line the pockets of corrupt politicians) there are investors/entities that back/guarantee the bond issued (which provides for the insurance wrap/guarantee, remember the ZIM "instrument"). Following this initial buy/sell there are one or two subsequent investors/entities that buy the bond and a last "exit" buyer expecting repayment. The bond is always flipped a couple of times with a quick profit made by a few of these good old boys and then the strong arm of the IMF makes sure these lucky old boys are all repaid. What a job! Mafia legitimized!

While the AIIB is involved in a similar venture it will facilitate the rebuilding of participating nation's infrastructure but using terms like, NON RECOURSE LOAN. This is because we, the ZIM Redeemers will have no need for repayment. We only need to manage the delivery and oversight of these "loans" such that the corrupt leadership with their cronyistic ways will be powerless to interfere. I believe we can do it given the chance.

If we are given the chance, that is. Yes, to ZIM or Not to ZIM. That remains the question. If the banks are being nixed and only redemption centers allowed to exchange ZIM under a "Private Bank" scenario these banks will revolt. Could this be where we are now? Waiting for negotiations to be managed? Well, they are probably asking, how is it possible to cut off the gravy train? It can and must be done because the Financial System, including central banks and all tier 1 banks, have proven they can NOT be trusted to deal fairly. Their days of omnipresent control of money movement all over the world are numbered.

Taking a lesson from President Trump here, if AIIB is reading this; push the button and make it happen now. Move these ZIM exchanges beginning immediately through these Private Redemption Centers in military bases like we've heard about. Send people home with debit cards and cash in pocket and see how fast these tier 1 and 2 banks come kow towing. They will be begging for participation and then it's cooperation vs stalling EVERYONE IN THE WORLD.

Consider this a brainstorm of One in support of All.

We got your back AIIB. Make it happen now and so will we!