I'll let you know if I end up going to the trial to testify, yes, I'm serious. 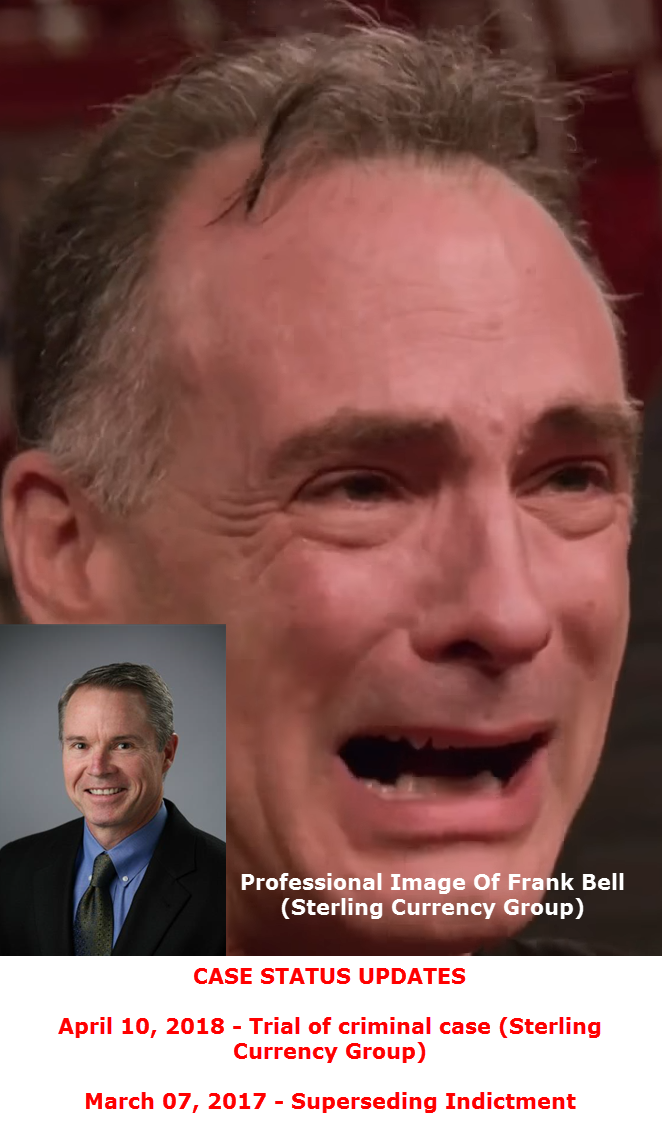 
Statement by Sterling Currency Group, LLC regarding charges brought by the United States Attorney’s Office for the Northern District of Georgia.

In June 2015, the United States Attorney's office for the Northern District of Georgia obtained search warrants and filed a civil forfeiture complaint as part of an investigation into Sterling and the Iraqi Dinar industry. Since then, Sterling provided evidence it believes demonstrated to the U.S. Attorney’s Office that the central factual allegations in the civil forfeiture complaint were inaccurate, and in some instances flatly false. Despite that, the U.S. Attorney’s Office has brought criminal charges against Sterling’s two owners and its chief operating officer.

From Sterling's perspective, these charges are without any merit. Sterling, a lawful business which sold a lawful product, was owned and operated by law-abiding and conscientious individuals, two of whom served extensively in the United States Armed Forces. These executives worked hard to ensure Sterling complied with all state and federal laws and regulations. This included investing enormous resources into its compliance program and maintaining extensive legal and other professional counsel to ensure it was fully compliant with all applicable laws.

Sterling and the named individuals strongly deny the U.S. Attorney’s charges and look forward to vigorously defending themselves throughout this process and at trial.

Awesome! Thanks Nick and Happy New Year to you!

wait hold on a second - I thought this trial was a farce, didn't Yosef ensure everyone that it was smoke and mirrors, that everyone would get the IQD bought from Sterling, and that they'd be vindicated?  Maybe transgender clone Trump will issue them a pardon before Paul Ryan is sworn in as The Anointed One?

The wheels of Justice do turn slowly...but hallelujah, it's about time Ty and Frank stood trial...

I was contacted by the FBI again yesterday (Wednesday 9/5/2018) but it had NOTHING TO DO WITH STERLING.

Previously, I was told I might have to go to Atlanta to testify against Sterling because I had spoken to Frank Bell on the phone and recorded my calls with him, we will see what happens, I'll keep you informed.

Regarding my call yesterday, I was not told WHO but I was told that someone had collected millions of dollars worth of Iraqi dinar and was holding it in Reno.

Definitely a money laundrering charge but we know those idiot gurus will find a way to spin this saying the powers that be "don't want us to exchange".

I can't imagine being on a conference call, I haven't heard any since probably 2017 and even then, it was the same as what we heard in 2011.

Regarding the money in Reno, we will probably be seeing news about this coming up, but for those of you who we warned about giving your money to "privately exchange" looks like you lost your "investment" and might get a fraction, if that.

Stay tuned for more information, I had someone redesign my old website but I haven't posted there in some time because I'm running another business but do eventually plan to have someone write professionally for me full time on real news: finance, currency markets, cryptocurrency etc.