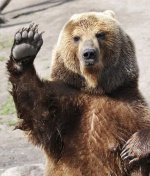 most likely poppabear just thought it interesting... but in no way do I think it has teeth

What a numbnuts!  Trump has been talking about the devaluation of the Chinese renminbi for years.  The problem is that by devaluing (lowering the value of a pegged currency) their currency China gained a competitive advantage with their exports because they were cheaper.  This was part of the currency wars story a few years ago.  When US officials told the Chinese that we were going to impose tariffs if they didn't raise the value of their currency, they revalued (raised the value).  Many people (including Trump) believe that it's still undervalued and want China to raise it some more.  Trump was just saying that he's confident that China will soon raise the value to where it should be so that they no longer have a competitive advantage with their exports and everybody will be competing on a level playing field.  This has NOTHING to do with a one world currency or global reset.  It's all about international trade and exports.  Whoever did this video has manure for brains.
*****************
Busting Gurus Since 2011