In most of Europe, people don’t have the right to keep and bear arms and as such terrorists have resorted to using trucks to run people over instead of shooting them. New York City is pretty much a gun-free zone as well and it looks like the terrorists have adopted the European model for murdering. 8 people were killed in NYC today after a man shouting “Allahu Akbar” ran them over in a rental truck.

A man in a pickup truck killed six people when he drove onto the West Side bike path in lower Manhattan Tuesday afternoon — and then shouted “Allahu Akbar” as he got out of the car with fake guns, police sources said.

The attack happened around 3:15 p.m., when a man in a flatbed pickup truck from Home Depot veered onto the bike path at West St., a few blocks north of Chambers St., police said.

The suspect, who was shot by police, then plowed his car into multiple people on the path, killing up to six and injuring several others, according to cops.

He continued driving south and hit another car, then got out and displayed “imitation firearms,” police said.

The man then shouted, “Allahu Akbar,” according to police sources.

Yelling Muslim shit and using a rented truck? That’s terrorism no matter how the democrats try to spin this one.


According to Fox News the police have the suspect in custody and don’t believe there is any further threat.


ABC News updates with another fatality:

A man driving a rental truck plowed into pedestrians and cyclists on a jogging and bike path in lower Manhattan in New York City Tuesday afternoon, killing at least eight people and injuring many others in what New York City Mayor Bill de Blasio called a “cowardly act of terror.”

Of course ABC, being a liberal network, left out the “Allahu Akbar” thing. You know, so people don’t get the idea this was the work of a radical Islamic Terrorist.


Seriously, this is what ABC wrote:

The suspect shouted something at police when officers confronted him, according to multiple sources.

The suspect shouting something? Was it something like that thing Muslims yell when they kill innocent people? You know, when they are committing acts of terrorism?


The FBI has less of a liberal agenda and are treating this as an act of terrorism as they investigate.


Liberals won’t be able to twist this into another call for gun control, but they will find a way to exploit these innocent victims. I’m not sure how, but that’s what liberals do. Maybe it’s global warming or it could be amnesty of all illegal aliens. Whatever the case, the left is on it.
Meanwhile, clearly banning guns for law-abiding people doesn’t stop crime or terrorism. This have been proven over and over in Europe and now has expanded to the New York City.

Truck attack in Manhattan kills 8 in 'act of terror'

New York (CNN)The driver of a rental truck drove down a busy bicycle path in Manhattan near the World Trade Center, killing eight people and injuring about a dozen others in what officials said was an "act of terror."
After crashing the truck into a school bus, the suspect exited the vehicle while displaying imitation firearms and was shot in the abdomen by police, according to the NYPD.


The suspect, a 29-year-old man, is in police custody and was taken to a hospital for treatment, officials said.


The incident is being investigated as terrorism, officials said. Witnesses reported the suspect was yelling "Allahu Akbar," according to four law enforcement sources. The FBI's Joint Terrorism Task Force is taking over the lead of the investigation.


The statements made by the driver moments after leaving the truck and the method of the attack were consistent with other terrorist attacks, New York City Police Commissioner James P. O'Neill said. Vehicles have been used as weapons in a number of terrorist attacks in recent years, including in deadly incidents in Nice, France, and London.

"This was an act of terror, and a particularly cowardly act of terror," New York Mayor Bill de Blasio said, "aimed at innocent civilians, aimed at people going about their lives who had no idea what was about to hit them."
The suspect, driving in a Home Depot rental truck, hopped a curb at West Houston Street and drove south on the bike path on the west side of West Side Highway in Lower Manhattan for several blocks, officials said.

Just after the incident, news footage showed several mangled bicycles on the popular bike path as medics tended to the wounded in the background.
Six people were declared dead at the scene and two were pronounced dead at the hospital. 11 others were transported to the hospital with serious but non-life-threatening injuries, according to New York Fire Commissioner Daniel Nigro.

A suspect drove a white truck down a heavily trafficked bike path in New York City on Thursday.

No other suspects are being sought, the NYPD said.

A spokesman for Home Depot confirmed one of the company's rental trucks was part of an incident in lower Manhattan and said the company is "cooperating with authorities" in the investigation.

News footage showed crowds of spectators -- some capturing the scene with cellphone cameras -- gathered behind police lines. A white Home Depot truck with the front end smashed was also visible. 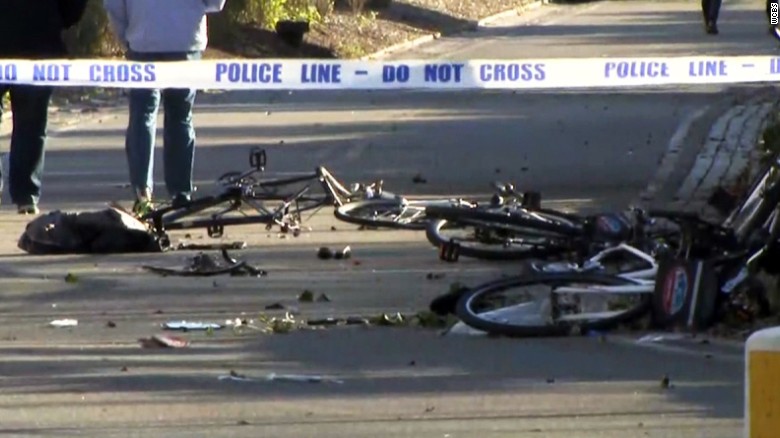 Parts of mangled bikes are strewn on the ground in Manhattan on Tuesday.
Eugene Duffy said he had just left work at Pier 26 and was waiting on the light to cross West Street when he heard a scream. He thought it might have been a Halloween prank but he said the scream was bloodcurdling.

"I look down and I see a white pickup truck a couple of more blocks down in the bike path," he said. "Automatically, I know something's wrong. Then, as I go down more toward where the girl is screaming, I see two gentlemen laying there and they have tire tracks marked across their bodies. You could tell they both weren't here."

He continued to walk closer to the scene. Gunshots rang out. He saw cops ducking for cover. A yellow school bus was smashed nearby. Cops descended on the area.

"I thought automatically, this area, I thought it was terrorism," he said.
Michael Corbin, the assistant real estate manager for District Council 37, the city's largest public employees union, was standing outside the union's lower Manhattan offices attending to a woman who slipped and fell on the sidewalk.
"The first responder to the event was a counterterrorism officer," he said. "We were attending to the victim, getting her onto a stretcher and, at that moment, we heard gunshots. I recalled hearing five gunshots in quick succession and immediately the officer ... left to investigate the situation from the direction we heard the noise coming from."

Another witness, Ramon Cruz, described what he saw.

"What I saw was that the driver -- he didn't look like he was bleeding," said Cruz. "He was dragging his foot. He looks frustrated, panicked, confused. People are running past me, saying, 'He's got a gun. He's got a gun.' I didn't see any gun.

"It was a white pickup truck. He looked pretty bad without bleeding or anything like that. I didn't see him hit anybody. All I heard was the impact of a crash."


Tuesday afternoon on Twitter, a user posted an image of a person lying on the ground near the scene of an incident near West & Chambers Streets in Manhattan. 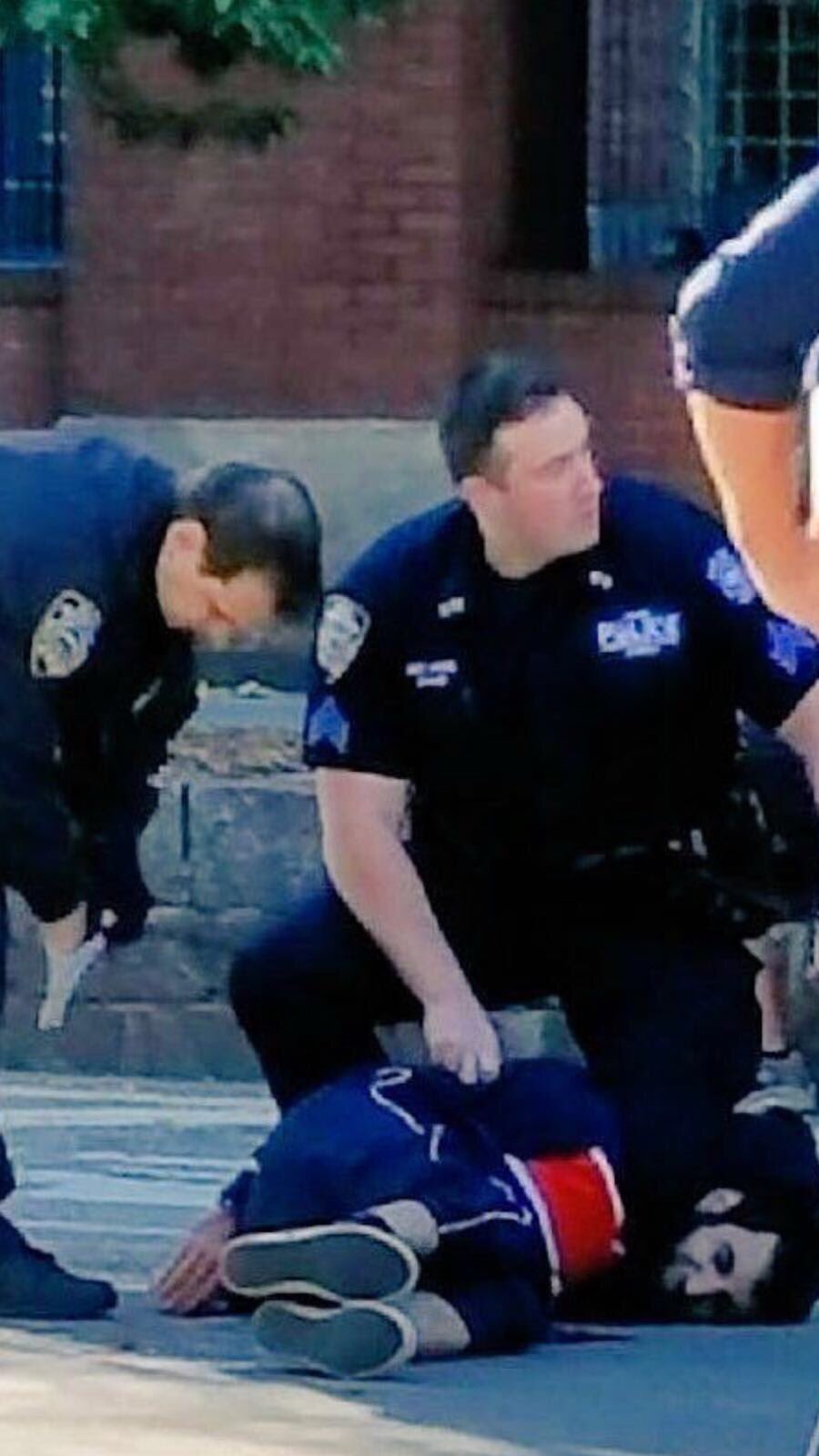