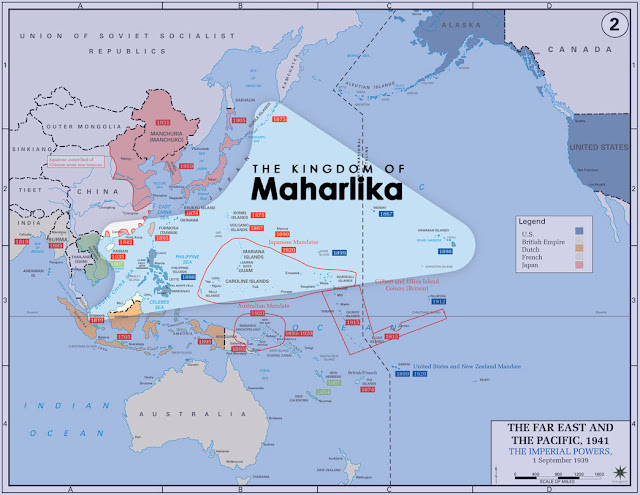 Maharlika is a very ancient name.

It may be traced since the reawakening of Lemurian Ancestors from the ancient, powerful Nation of Maharloka in MU/ Lemuria prior to the sinking of Sundaland - Kumari Kandam approximately 60,000+ years ago, where Kumari Kandam totally sank and only the high peaks of Sundaland, known as the 7 Blessed Isle of Lemuria (Java, Sumatra, Borneo, Philippines, Guinea, Moluccas, Malay Peninsula), remained to this day.

The survivors of Maharloka were the Dravidians and Maharlikans, the former being fellow countrymen from ancient Maharloka. However, a portion of the Philippines survived for it "floated" as evidenced in the Tectonic Plates and geological manifestations particularly in Mindanao.

Every child born on Mother Earth originates from this clan, so we are ALL related!

Maharlikha is a profound Spiritual word. It means 'Noble Work,' MAHAD/R LEKHA in Sanskrit, MAHAL na LIKHA in Filipino, GREAT CREATION, CHOSEN PEOPLE. PILI (Chosen) PINO (Fine). It also means Noble, Sovereign, FREE PERSON by ancient ancestors and very ancient in origin since Creation in the Garden of Eden of MU / Lemuria as preserved and narrated by Indigenous Tribes who still exist and are known in recent history as the Sultans.

His Royal Highness/Sultan still sits in seat over this Royal Kingdom, although relegated to Spiritual Authority in early 1900's (like most indigenous tribal nations by genocide of invaders). The rule of this same, the Grandfather Maharlikhan Tribe of One World Divine (Interstellar / Interdimensional) known by locals as the old man from the mountain.

The 144,000 original inhabitants from the Garden of Eden as prophesied in Revelations 14:1 are now scattered Worldwide and manifesting Sovereignty in Spirit, for the true Land of Promise is in the Philippines, the remnant of ancient Motherland MU / Lemuria.

The Templars referred to these ancient lands as Merica, also the name of Venus, as they followed her guiding Light to the Maharlikha shores. King Arthur journeyed to this territory to heal from his wounds.

The Dravidians escaped to present Sri Lanka, then to India. Meanwhile, Noah's Ark that originated from the true Land of Promise (Mindanao) drifted to Mt. Ararat and his descendants built the earliest post Diluvial civilizations, including ancient Sumeria from where Abraham originated from.

The Nobleness enlightened Abraham as the noble people preserved the ancient knowledge such as the Garden of Eden, the fall of first parents Addan and Eba, Monotheism (Law of One), offsprings as stars, etc. for Maharloka meant the Starry Realms. Abrahamic religions were influenced by Maharlika rather than the other way around.

Maharlika with origin of Noble, Sovereign FREE Humanity was from the Garden of Eden, this Garden also still exists in Inner Earth, called the City of Gold/City of Lights, the remnant of ancient MU / Lemuria (Philippines) who were fearfully and wonderfully made and imbued with Free Will.

Even Sanskrit does not have a full word for it, but our Ancestors from the Land of Promise of our Motherland, INANG BAYAN, knew the Grandfathers of all tribes, but the Maharlikhan Tribe was the 144,000 original inhabitants from the Garden of Eden, now manifesting Nobility and Sovereignty in Spirit who are scattered Worldwide, with whom the Queen of the South traveled to Persia, ultimately marrying King David and having a son, Solomon.

The Divine Governmence, which still exists, of the Maharlika (Pilipino) is propelling Earth Humanity towards a Peaceful Civilization. All Indigenous Royal Families, Chieftains & Grandmothers of Mother Earth, are gathering now, the reunions began in January 2016 and will continue until all tribal nations, in honor of our Mother Earth, are reunited as One.

The Philippines was referred to by the ancient Hebrews as Ophir.

The original Hebrews who enlightened and traveled with Abraham were olive to brown skinned Maharlikans as evidenced by an ancient Egyptian pictoglyphs that portrayed of the original Habirus (Hebrews).

The Beloved in the Song of Solomon with skin darkened by the kiss of Sun would be from the land of the Queen of South, also known as Sheba (Java). The Queen of Sheba, Solomon's Mother, the Solomon Islands named after Solomon.

The descendants of Solomon's soldiers immortalized the uniforms of their Hebrew ancestors with the Moriones Festival costume in the Philippines, with helmets shaped like horse mane as King Solomon was known for horses, the tradition eventually influenced by Roman Catholicism with the coming of Spaniards, worn with mask that depicted the Roman soldiers.

The builders of Solomon's Temple still lived and thrived in the island of Bohol with the Eskaya Tribe, their unique language embedded through centuries with sprinklings of Hebrew, Greek, Roman, Estruscan words.

The ancient Greeks referred to Maharlika as Chryse or "Isles of Gold", the ancient Hindus as Suvarnadwipa.

The ancient Chinese recalled of the Land as Lusong Dao. There are currently two small Isles of Gold which appear out of the water, from afar they look like long sand bars, and have been blurred out on Google Earth maps.

The local indigenous are very aware of their location and they are spiritually protected, no man has been able to harvest them and survive, as they belong to Mother Earth, they are imbued as her body, relating to her heart, and can never be harvested.

After the Babylonian captivity and the reign of benevolent King Cyrus of Persian Empire, the Tribe of Judah returned to Jerusalem hence became the descendants of Jews. However, some brought with them the ancient Babylonian usury, and were confronted by Christ when its practitioners turned the Jerusalem Temple into a "den of money changers."

However, 10 Lost Tribes of Israel of the sons of Jacob of the original Hebrews, the Chosen People, PILI PINO, had returned to the present day Philippines, that for centuries traveled from Persia, to India, to Borneo, then to Philippines.

They were said known in mainstream historical tradition as the 10 Bornean Datus.

The Tribe of Ishmael, son of Abraham, became the Moslem brethrens, the current Royal King descends from and is still in reign today.

Meanwhile the Tribe of Ephraim son of Joseph, Jacob's favorite son, sailed across the Americas and became the ancestors of the Red Indians of America, who still remembered the ancient cities of their Lemurian ancestors called Cibola (City of Reds/ Gold).

The Mormons, 'Book of Mormon' chronicles their story. The Bagobo Peoples claimed that the source of names of all tribes in the World originated from Cibolan River in the foothills of Mt. Apo, in the Land of Maharlika (Philippines), the ancient Motherland.

The Tribe of Dan were said to later migrate to Europe and became the descendants of the Celtic, Viking, Visigoth, other Germanic Tribes. The ancient Phoenicians encoded in their symbolic patterns the location of the Golden Isle of the Pili Pino, referred to in the Bible as Ophir.

The Ancient Greeks recalled and interacted with Maharlika with the name Chryse that was first mentioned during the Trojan War, later becoming the known Christopherios. As narrated by Plato, Socrates taught his disciples of Humanity's very ancient Hermaphroditic ancestors that may be traced since the Paleozoic Era more than 250 million years ago, the knowledge possibly originated from the B'laan Tribe of Mindanao.

Odysseus, whose ship and crew were left to wander by the gods across the ancient World, had found themselves adrift towards Maharlika and the notorious island of Zamal, land of the giants.

More than 2,000 years later, Magellan and his Spanish crew sailed back first landing on Humunus Island, the indigenous name for Lemuria / MU is Humunus.

There is deep respect and protection of Mother Earth's resources in the MotherLand, as they do not belong to one, nor one nation, they belong to Mother Earth. Just ask the Mayans, the Tibetans, the Kogi, the Hopi, the Moros, the Sans, the Daos, and all the ancient Royal Families still intact who honor and respect our Earth as our Mother, the giver of ALL life, to ALL, freely!

Seek ye first the Kingdom of GOD (Matthew 6:33). The Kingdom is within (Luke 17:21) and those who find it will lead you home to your family, we are all related, we are all of royal birth, we are all The Maharlikan Royal Kingdom, Miracle of Jonah, prophesied by Issa (ISA / ONE) more than 2000 years ago... and known by indigenous oral traditions for over 60,000 years.