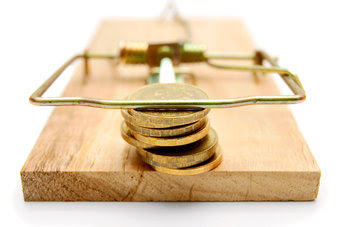 In the old days there was no paper money.

Man accepted tokens of exchange such as precious metals minted into coins by the Church and the Crown.

Because there was only a limited amount of gold and silver available, the economic life of the nation had a certain regularity.

An even greater restriction existed throughout Christendom. This was a prohibition against usury, or charging interest.

The Church held it to be a grave sin and the code was upheld by the civil powers. There were harsh penalties for those who broke the law.

The regulation of usury was to prevent the separation of money from reality. Money is not a good, it is a measure.

It is fraud to pretend otherwise, and constitutes theft.

Several important things arose from the prohibition of usury in medieval Christendom.

Firstly Jews, who had taken to wandering around Europe in the Middle Ages, began to specialize in money-lending and other practices which were forbidden to Christians.

Exploited Christians, both peasants and aristocracy, found themselves being bled dry by usurers, which is why there were sporadic uprisings, imprisonments and expulsions of Jews throughout Europe.

It is one reason why King Edward I expelled these perfidious people from England in 1290.

Oliver Cromwell allowed them back when the moral authority of the Church was undermined and the King was beheaded in 1649.

Secondly, gold coins, jewels and other valuables were deposited with people who held strongboxes.

This was usually with goldsmiths and money-lenders who, more often than not, were one and the same.

These loan-sharks and scriveners realized that, without much chance of being found out, they could charge people for looking after their deposits and then use those deposits – which did not belong to them – to make loans to other people at interest.

They soon became rich and powerful.

Gold coins are heavy and awkward to carry around so the custom arose whereby the money-lenders would issue credit notes to depositors who began to trade these notes between themselves in commercial transactions.

Paper money had come into existence and was managed by the Knights Templar from town to town, in small inns using paper chits one could turn in versus carrying precious metal coins.

A new form of usury developed as the swindling money-lenders realized the immoral benefits that could be obtained from such a situation.

It became apparent to these thieves that they could go one step further than dishonestly using other people’s money for financial advantage at no cost to themselves.

They could invent money from absolutely nothing. They could issue additional credit notes with nothing to back them up and put them into circulation as interest-bearing debts.

No-one would be any the wiser.

They calculated that they could safely issue notes for up to ten times more than the gold deposits they held, because the depositors would never ask for their deposits back all at the same time.

The principle of modern banking was thus established: invent money from nothing, put it into circulation as “running cash notes” that have to be paid back with real wealth that is produced from our labour, sit back and become unbelievably wealthy and powerful men: hidden rulers of nations.

In England this deceitful system was officially sanctioned in 1694. The usurper of the throne, William of Orange, had overthrown the legitimate King James II with the financial backing and plotting of powerful Jewish financiers in Amsterdam.

In return he gave the sovereignty of England to a group of financiers by means of a Charter allowing them to call themselves the Bank of England.

The Charter made no mention of issuing the nation’s money, but within minutes of signing the new Bank officials were discussing the form of their “running cash notes.”

The same system was adopted in every country by a process of Masonic revolution and manipulation.

Theorists and ideologues have never attacked the essential mechanism of capitalism.

Although the injustices of the capitalist system have been attacked in volume after volume, and rightly so, they have never even hinted at the usury upon which the whole system is built and from which all the other injustices stem.

Nowadays banking has become extremely sophisticated but the hidden and usurious mechanism behind it remains the same.

After a big enquiry, hushed up as much as possible, the Federal Reserve Bank in 1913 and the Bank of England in 1945 were nationalised.

Both the United States and British Treasuries, in conjunction with Federal Reserve Bank and Bank of England’s advise each government and determine how much paper money and coin will be issued each year.

This has to accord with the wealth of each nation for that year.

But because banknotes and coins only account for a tiny percentage of financial transactions, it makes no difference to the bankers at all.

Most financial transactions are carried out with abstract figures on a computer screen that have no relationship to real wealth.

Everything has to be paid for at interest though – even when it doesn’t exist!

These governments--and all governments with similar private central banks hat appear as public good institutions--still are paid interest (in gold bullion) on old and new loans owed to their respective Central Bank.

Only a few years ago it was announced that the interest debt on a loan taken during the Napoleonic War had just been paid off!

This is where all of our tax money goes. To at off old wars!!

The next stage of development for international finance was get rid of cash altogether for manevloent reasons.

Then token accountability for the bankers could disappear along with all liquidity of cash.

Their intention is that everyone will have to use credit/debit cards for every type of commercial transaction.

Electronic technology, when used this way, and when it is not merely widespread but compulsory, would have given them complete control of every man, woman and child in the world.

If you cannot buy or sell – food, petrol, clothes without a card - you are completely at their mercy.

Fortunately, the reverse happened and sanity set in as led by the Asian race and the central banking industry was defeated, replaced by a benevolent economic force using quantum computing satellites and computing systems to guard against future usury frauds.

Know both the Bank of England and Federal Reserve Bank have been overtaken due to default and kept in place (name only) as to not scare the general public or markets.

As has have the hidden governments of each country. All scheming politician puppets have been neutered - no longer controlled by such illegal and immoral central banks or the international banking families that once owned them.

Turns out he New World Order forget that Truth is more powerful than they could ever become. And with the Truth brings Justice!
*****************
>>>TNTBS's YouTube Channel<<<

The only thing that scares me is you Yosef, & the rest of the gurus, for years every since the conception of the general 64 group ,okie,the dinar dealers, & more of course, this cult has conned more people out of there money, has caused emotional strains, family division, suicides , divorces, & financially destroyed many people, that of any scam I have ever witnessed ,I was heavily involved in the dinar years ago, when the General 64 group started up, oh it sounded so good , legitimate , like every one was going to be rich beyond there dreams, overnight ! I even had friends that sighed up other friends for the 64 group, which snowballed the sale of the dinar, people actually spending there 401Ks & there nest eggs, there retirement savings on this scam, it sounded to good to be true, which years later I found that it was not any truth in it.
What gets me there is no remorse among any of the gurus or any of the 64 leadership they still insists that we will be wealthy beyond our wildest dreams, OVERNIGHT! why would there  any remorse? That's because they knew the truth , there was no intentions of good intentions, if there was there would had been a RV years ago, this scam has drugged out to long for it to be a legitimate investment, it has only made the con artists richer,who else has gotten anything from it?