West demands ‘credible and durable ceasefire’ for Aleppo as basis for talks as US calls proposal ‘too little, too late’ 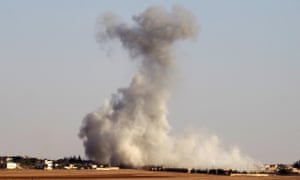 The US and the UK have rejected a Russian and Syrian offer of a temporary “pause” on airstrikes in Aleppo as the basis for reopening talks, saying there has to be a credible and durable ceasefire that should initially last as long as 48 hours.
Moscow had announced a temporary halt in the military push ahead of a planned eight-hour humanitarian pause on Thursday, designed to give rebel militants and the injured a chance to leave the city.


The US State Department said the Russian offer was too little, too late, and the UN humanitarian spokesman said that relief workers needed longer than eight hours to help extricate the injured.


Moscow announced on Tuesday that Russian and Syrian warplanes had halted their bombardment of the rebel-held districts of the city. Russia’s defence minister, Sergei Shoigu, said “The early halting of airstrikes is necessary to declare a ‘humanitarian pause’. It will … guarantee a safe exit of civilians through six corridors and prepare for the evacuation of the ill and the wounded from the eastern part of Aleppo.”

Russian president Vladimir Putin’s spokesman, Dmitry Peskov, said the halt in the airstrikes was a goodwill gesture to pave the way for Thursday’s pause. “The Russian military is offering yet another chance, and we hope that our partners will allow us all to take advantage of that,” Peskov said.


The United Nations said Russia has communicated plans for two eight-hour cease-fires in rebel-held parts of Aleppo over “consecutive days” this week, implying there may be a further pause on Friday.


Jens Laerke of UN humanitarian coordinator OCHA said in Geneva the agency needs assurances from all sides that fighting will stop before it can provide humanitarian assistance to the city.


The Syrian crisis is likely to be discussed by Putin, German chancellor Angela Merkel and French president François Hollande when they meet in Berlin on Wednesday, primarily to discuss the Ukrainian stand-off.


Merkel said sanctions against Russia over its actions in Syria should remain an option and cautioned against miracles over the Ukraine crisis.


The Russians appear to be trying to work round both Britain and France by attempting to win the support of Saudi Arabia, Turkey and Qatar for a ceasefire that will put pressure on al-Nusra front fighters to leave Aleppo. Estimates of the number of al-Nusra fighters in the city vary between 400 and 900.

In Moscow, Shoigu explained Russia is “asking the countries wielding influence with the [Syrian] rebels … to persuade their leaders to end fighting and leave the city”.
Russia has improved its relations with Turkey, and neither Turkey or Saudi Arabia say they want al-Nusra to remain in Aleppo. America has also condemned the al-Nusra prescence, saying despite a name change the group remains ideologically affiliated to al-Qaida.

Repeated efforts to separate moderate fighters from al-Nusra have so far come to nothing, partly due to resistance in Aleppo, and the lack of assurances about the length of the ceasefire.


Within the Aleppo there was no sign of support for the Russian proposal. “The factions completely reject any exit – this is surrender,” Zakaria Malahifji, political officer of the Aleppo-based Fastaqim group told Reuters.


Al-Farouk Abu Bakr, an Aleppo commander in the powerful Islamist group Ahrar al-Sham, said the rebels would fight on.


“When we took up arms at the start of the revolution to defend our abandoned people we promised God that we would not lay them down until the downfall of this criminal regime,” he said, referring to President Bashar al-Assad’s government.
“There are no terrorists in Aleppo,” he said, speaking from Aleppo. Rebels in eastern Aleppo have consistently said that insurgent groups linked to al-Qaida or inspired by it have no real presence in the opposition-held part of the city.


Johnson also claimed the mood of the British public was certainly changing to supporting a more military response to the “barbaric” Russian actions. But he added: “I do not yet detect a sufficient appetite in the capitals of the west, and certainly not yet in the White House, for the kind of action that I think could be useful, but, as secretary Kerry said, nothing is ‘off the table’.”


But Vitaly Churkin, Russia’s permanent representative to the UN, said “The chances of this plan succeeding are quite reasonable if the so-called ‘moderates’ greatly outnumber al-Nusra fighters.” He added that the ratio can be as high as 10 to 1 or even 12 to 1, if the UK Foreign Office has provided accurate estimates, claiming that there are somewhere between 10,000 and 12,000 ‘moderate’ rebels in Aleppo.
The European Union said on Monday that “deliberate targeting of hospitals, medical personnel, schools and essential infrastructure” by Syria and Russia could amount to war crimes.