Hundreds of casualties in air raids on Syrian market--VIDEO

Hundreds of casualties in air raids on Syrian market--VIDEO

At least 110 people dead and 300 injured in a string of regime air raids on Douma near Damascus, activists say.

At least 110 people have been killed in a string of Syrian government air strikes on a marketplace in Douma, a rebel-held town near Damascus, activists said.

At least 300 people were injured, with the death toll, most of them civilians, likely to rise as many of the wounded were in a serious condition, the UK-based Syrian Observatory for Human Rights said on Sunday.
The civil defence in Douma put the death toll at 100.

Firas Abdullah, a local photographer in Douma, told Al Jazeera that the market was the main one in the town.
"The market has always been crowded with people buying and selling to make a living," he said.

The attack on the market is the second in a week. On Wednesday, air strikes on the area left at least 27 people killed, Abdullah said.

Al Jazeera's Zeina Khodr, who is reporting from Beirut, said the death toll was so high as after the first strike, people had gathered to help evacuate the wounded, when more raids hit.

Rami Abdelrahman of the Syrian Observatory of Human Rights said his information suggested that most of the dead were civilians.

A video posted online by activists of the aftermath of the attacks showed an intersection strewn with rubble and twisted metal. 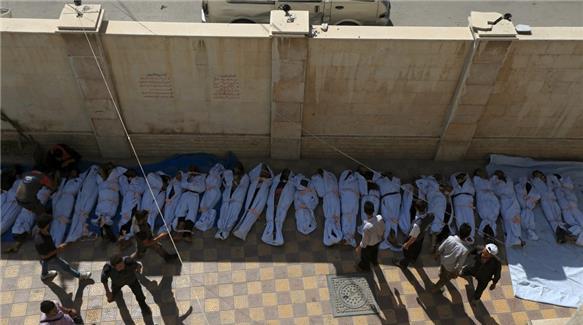 The fronts of several buildings nearby appeared to have been sheared off by the force of the blasts, and several vehicles were overturned and crumpled amid the rubble.

The civil defence posted the following video it said was from the aftermath of the attack: